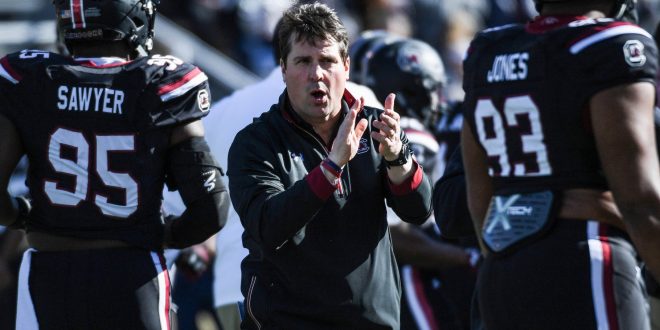 Gainesville, Fla. — South Carolina and North Carolina State are keeping tradition alive in their 2017 season opener. The first game of the season will allow the Wolfpack to break a tie with North Carolina as the team that has played USC the most, other than Clemson and Georgia.

Saturday is the third time in 10 years the two teams have opened their season’s up against each other. This year the stage is set in Charlotte, with kick off set for 3 p.m.

Although it’s only Week 1, NC State head coach Dave Doeren expects this to be a heavy-handed game. His team struggled in the first half of last season, but went out on a hot streak by beating North Carolina and Vanderbilt.

If there’s anything the Wolfpack have going into this season, it’s experience. They return 18 starters from 2016, 11 of which are seniors. Even more knowledgeable is the defense, with all eight returning starters being seniors, including the entire front six.

Defensive end Bradley Chubb is a force to be reckoned with. The seasoned returner ended the 2016 ranked second in the ACC and fourth in the FBS in tackles for loss (22). Chubb was the national leader at the end of the regular season.

As for the offense, they’ll look to fill the void left by running back Matt Dayes, who was on the carry for almost half of the team total last year (249 of 504). The rushing offense was built around Dayes, who totaled 1,166 yards on the season – 74% of the combined yardage of all the running backs.

They do have the utility of Jaylen Samuels, who started as a tight end but is listed as an H-back. He’s led the team in receptions the past two seasons, averaged a touchdown every 5.9 carries, and recorded 73% accuracy on blocking assignments.

Something the Wolfpack won’t want to carry with them into this year are the numerous close-call losses from last season. Four of NC State’s six losses last season were decided by seven points or less.

High Hopes for the Gamecocks

Even up against a tough NC State defense, the Gamecocks’ offense expects to be more successful this season.

They have a lot to work with: 10 starters returning, led by sophomore quarterback Jake Bentley and all of his prime receivers. Bentley used last season to iron out some freshman wrinkles and will go into 2017 with a full season under his belt. The offense struggles on the ground, averaging only 134.4 yards per game last season. South Carolina finished 13th out of the 14 offenses in the SEC.

On the line, they’ll need Malik Young to be able to match up with Chubb. In order to develop their offense, South Carolina needs him and the rest of the line to protect Bentley.

Muschamp has invested much of his time to rebuild the Gamecocks defense, who worked back up to 50th in S&P last season. D.J. Smith was a standout; he led the team with 79 tackles.

Season openers naturally carry their own hype, but this tradition-ridden, ACC vs. SEC showdown is much anticipated. You can tune in to ESPN for coverage of the game