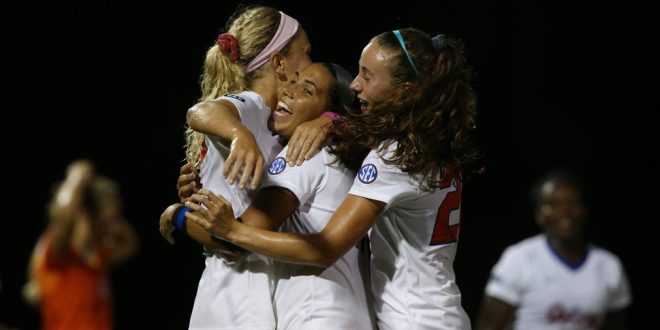 The No.2 ranked Florida Gators soccer team is heading to Seattle, WA this weekend for the Husky/Nike Invitational. The Gators will start tournament play Friday night where they will face the Washington Huskies at 11 p.m. Florida will finish tournament against the Portland Pilots Sunday night at 9 p.m.

🐊 ⚽️ in Seattle tonight to face Washington at 11pm ET.

The Gators currently have a 4-0 overall record after defeating Stanford and Syracuse in last weekend’s home action. The Gators defeated Stanford 3-2 last Friday coming back twice and then finally taking the lead in the 82nd minute.

Florida took home another win last Sunday against Syracuse, 2-1. Gabby Seiler scored a penalty kick in the eighth minute and Parker Roberts scored the game-winner in the 57th minute. After this win over Syracuse, Florida moved to 4-0 for the first time since 2010.

The Gators have shown great resilience in their ability and are not letting the scoreboard dictate their play this season.

The Washington Huskies started their season with three consecutive road games. However, they opened home action last Sunday with a 2-1 loss against Southern Methodist. Overall, they have a 2-2 record.

Burleigh thinks Washington is going to be very direct in terms of their playstyle.

The Portland Pilots are also currently 2-2. The Pilots are coming off two road matches, a 1-0 win against UC Davis and a 3-0 loss against UC Irvine. Portland will open the Husky/Nike invitational play against New Mexico tonight before they face the Gators on Sunday.

Portland is well coached, however, Burleigh believes they are not as athletic as the Gators.

Burleigh is looking forward to this weekend’s match ups because with playing two teams on the road with a 3 hour time difference, the team will gain a lot of experience. Most of the team has never been to Seattle, so everyone is excited.

These games will help prepare the team for conference play and the postseason.

Sydney is a senior studying telecommunications with a specialization in sports media at the University of Florida. She is a multimedia sports reporter for ESPN 98.1 FM/850 AM WRUF and WUFT-TV.
Previous Vanderbilt Takes on Middle Tennessee State in Season Opener
Next Mississippi State vs Charleston Southern Preview