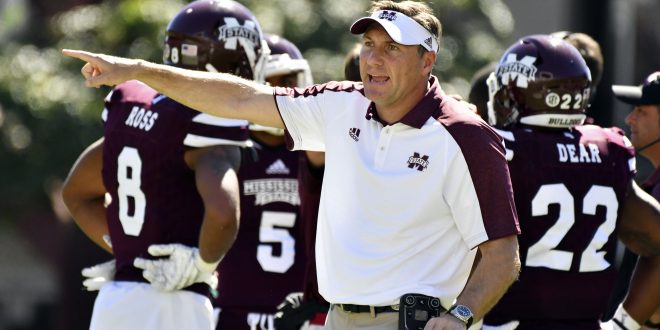 After being hired in December in 2008, Dan Mullen has spent 9 years as the Head Coach for Mississippi State. In an interview Mullen addressed how stacked they are at running back having junior Aeris Williams, junior Dontavian Lee, sophomore Nick Gibson, sophomore Alec Murphy and Freshman Kylin Hill. Aeris Williams should start, but the others will more than likely also be used.

One position that does draw some question is kicker. As of now Coach Mullen says there is still a three way battle and he’ll be looking for not only consistency but also who has the tenacity to win.

The Bulldogs are unranked nationally in the major preseason polls. 247 Sports has the team preseason ranked 9th overall in the SEC. We’ll look to see how Coach Mullen leads his team with a chip on their shoulders this season.

Two days from kickoff and here's a look at the matchup @CSUFB has in front of them on Saturday afternoon #GoBucs pic.twitter.com/o4KLwnknem

Charleston Southern promoted quarterbacks coach, Mark Tucker, back in January and Saturday will be his head coaching debut. Coach Tucker has been with the team for the last four years and has kept QB play strong in Charleston.

Due to the Hurricane that has hit Houston, Texas; Mississippi State along with the University of Florida, Texas A&M, Utah, Ohio State and Indiana will be showing support by wearing decals on their helmets this opening week.

The game is set to kick off Saturday September 2nd at 4 P.M. EST in Starkville, MS on the SEC Network.

Follow me on Twitter @SarahCarlieUF or Instagram @sarahcarlie
@SarahCarlieUF
Previous Weekend Preview: Gator Soccer Heads to Seattle
Next Game of the week or game of the year: Alabama vs FSU