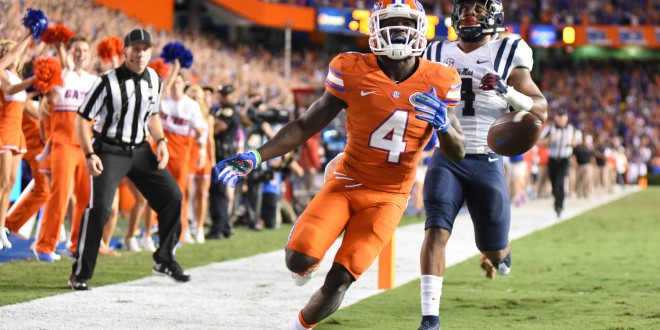 Brandon Powell scores a 77-yard TD in the second quarter

Florida Gators Running Back Brandon Powell with a direct snap, impacted last Saturday’s game rushing to the pylon extending his arm for the touchdown. This was the start of a fourteen point rally that extended Florida’s win streak to 31 against the Wildcats. Similar to last week’s game, this week is chaotic with the Gators announcing a new starting quarterback, nine players charged with third-degree felonies and they play a feisty Vanderbilt team.

"Freddie Swain you just scored a touchdown and you just tied the game." @Ldelrio12 ➡ @Freddie_iball2 was Saturday's Play of the Game. pic.twitter.com/oyPLLK8LIu

After an amazing fourth-quarter comeback against Kentucky, Luke Del Rio was named the starting quarterback. The last time Del Rio started for the Gators he suffered a shoulder injury against the Arkansas Razorbacks. As a starting quarterback Del Rio has a record of 6-1 (3-1 SEC). According to Powell, Del Rio showed his leadership ability as he aided the Gators to win against Kentucky.

Powell and the Receiving Corp

A Game Against Vanderbilt

Powell emphasizes that Vanderbilt is a team that doesn’t make many mistakes causing them to be a difficult team to play. In the last two meetings, the Gators have only scrounged 247 yards on offense per game. Despite a 59-0 defeat to Alabama, Vanderbilt could avenge their embarrassment by giving the Gators a hard time.

With a big SEC East match-up coming up, the Gators look to add to their resumé on the road back to Atlanta. The Florida Gators will host the Vanderbilt Commodores at noon this Saturday.