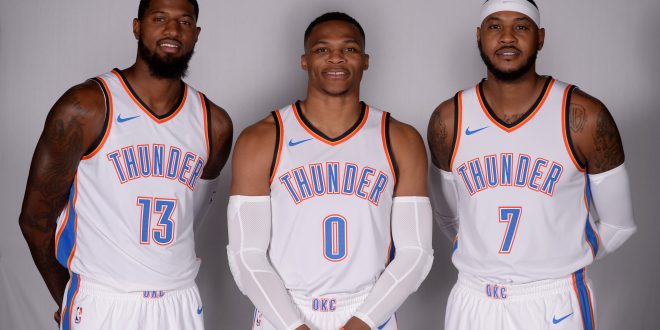 All Love For Anthony in Oklahoma City

With trying camp underway and  just a few days till preseason play, the Oklahoma City Thunder are loving their new acquisitions.

On Monday, the Oklahoma City Thunder announced that it had acquired Carmelo Anthony from the New York Knicks. For Anthony the Thunder exchanged Doug McDermott, Enes Kanter and a 2018 second round draft pick.

A strong player indeed and defiantly a great addition according to Oklahoma city point guard, Russell Westbrroke. At media day, Westbrook said he is excited to play next to new teammates like Anthony.

Coming to The Thunder:

At media day, Anthony was very open about his feelings towards the tender and his new team. Anthony said he missed the feeling of winning and thinks that OKC is the perfect fit for him.

However, Anthony still thinks one more player should be added to the roster. Carmelo joked about getting Dwyane Wade to Oklahoma City.

Training camp will close out while preseason play starts in October. The Thunder tips off its 10th preseason on October 3rd versus the Houston Rockets in Tulsa at the BOK Center. The club will head back to Oklahoma City for two contests, starting on Oct. 6. All preseason games can be heard on the Thunder Radio Network, led by flagship WWLS-The Sports Animal (98.1 FM) in Oklahoma City. 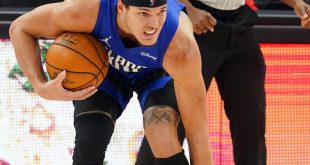 Sitting at 14th in the Eastern Conference, the Magic seem ready to move on from …