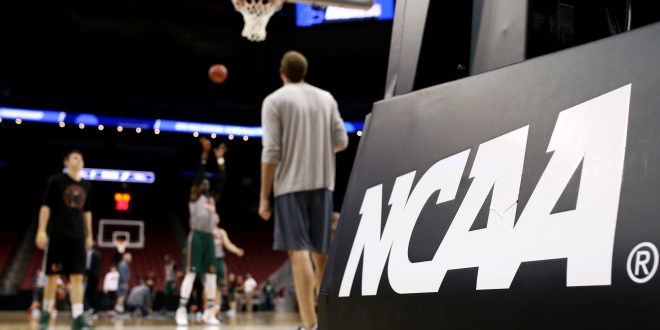 Mar 23, 2016; Louisville, KY, USA; A view of the NCAA logo on the basket while Miami practices during practice the day before the semifinals of the South regional of the NCAA Tournament at KFC YUM!. Mandatory Credit: Aaron Doster-USA TODAY Sports

Yet another scandal is rocking the collegiate athletics world.

Four assistant coaches at Division I basketball schools have been arrested by the FBI and face charges of corruption and fraud, according an announcement from the U.S. Department of Justice on Tuesday.

“All of those charged today contributed to a pay-to-play culture that has no business in college basketball,” said William Sweeney, the FBI’s Assistant Director in Charge.

“The picture painted by the charges brought today is not a pretty one,” said Joon H. Kim, the acting U.S. Attorney for the Southern District of New York. “Coaches at some of the nation’s top programs soliciting and accepting cash bribes. Managers and financial advisers circling blue-chip prospects like coyotes. And employees of one of the world’s largest sportswear companies secretly funneling cash to the families of high school recruits.”

Another person named in court documents is James Gatto, director of global sports marketing at Adidas.

From the New York Times:

The complaint says about $100,000 was to be paid to the family of “Player-10,” a heavily recruited high school standout, to steer him to a particular college. It says contemporary news accounts described his college decision, announced this past June, as a surprise. Payments were arranged for other players’ families as well, the complaint says, including one who had not yet begun his junior year of high school.

The player who was to receive the $100,000 and the university recruiting him were not named, but the college is identified as being in Kentucky, and details point to the University of Louisville, which has an identical enrollment to the program in question. This summer, Louisville signed a 10-year, $160 million apparel contract with Adidas.

Louisville’s interim president later confirmed that the school is under federal investigation.

Statement from U of L acknowledges school is under investigation "involving criminal activity" with basketball recruiting pic.twitter.com/309Thh8Jge