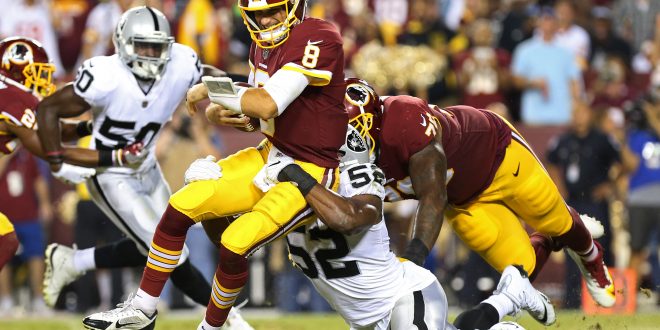 Tonight on Monday Night Football, the 2-1 Redskins visit the 3-0 Chiefs. Coverage of the game will start at 7:45 p.m. on ESPN Gainesville, and kickoff will begin at 8:30 p.m.

The Chiefs won their game last week against the Chargers 24-10. Although the score differential seems large, the Chargers put up more total yards than the Chiefs; 330-311. The major difference in the game was turnovers. The Chiefs forced three interceptions from Chargers quarterback Philip Rivers and allowed no touchdowns without turning the ball over once.

The Redskins won their last game against the Raiders by a similar scoreline, 27-10. However, Washington put up 472 total yards to Oakland’s 128. Quarterback Kirk Cousins had a tremendous outing, throwing for 365 yards and three touchdowns on 25-of-30 attempts.

Redskins tackle Ty Nsekhe is sidelined for up to six weeks after undergoing surgery to correct a core-muscle injury on Sept. 24.

The Chiefs have fewer questionable players for the game, with Eric Fisher (back) and Kevin Pierre-Louis (groin) listed.

Redskins head coach Jay Gruden is focused on tonight’s game and gives his thoughts on the upcoming bye week for Washington.

The Chiefs have won six consecutive games against Washington, dating back to 1983. The series overall record is 8-1 in favor of Kansas City.