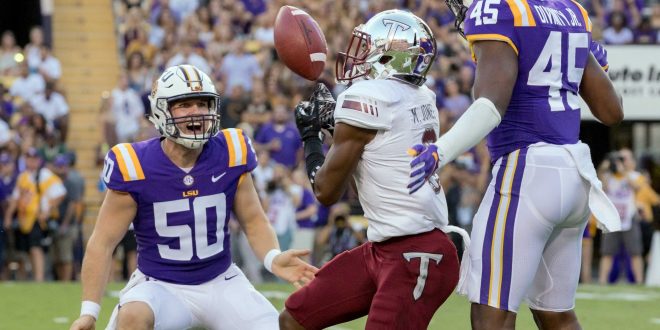 The LSU Tigers paid the Troy Trojans $985,000 to appear in Louisiana for the Tigers homecoming weekend. The Tigers expected to dominate their Sun Belt opponent, but the Trojans entered enemy territory ready for battle and won 24-21. LSU had not lost to a non-conference opponent at home in 49 games. A combination of key injuries, poor play calling and unnecessary turnovers by LSU contributed to the major upset.

The LSU football season has been a major disappointment thus far. The Tigers started with a preseason rank of 13, but fell drastically after a blowout loss to Mississippi State. With this recent loss to Troy, head coach Ed Orgeron’s job could be up in the air. However, there are many factors to blame for their lackluster performance in recent weeks.

Injuries are extremely common in football, but not many school have been as unlucky as LSU this season. Star running back Derrius Guice missed the game against Troy with a leg injury. Four key starters, including right tackle Toby Weathersby, defensive end Rashard Lawrence, and tight end/fullback J.D. Moore all missed the game with injuries. All in all, the Tigers were without 15 players on Saturday because of injuries and suspensions. This lack of depth not only limits what a team can call in terms of plays, but also forces players to be on the field for extended periods of time, which can be detrimental toward the end of games.

LSU did not seem in sync from the opening kickoff. The first play of the game was a hand-off to third string running back Nick Brossette. The junior proceeded to fumble the ball, which led to a Trojan touchdown five plays later. Ed Orgeron claimed that he was not aware that the play was going to happen.

The Tigers gave the ball up four times against Troy, including two interceptions and two fumbles, which led to 14 points. This sloppy play ultimately cost the Tigers the game. Orgeron took the blame for the loss, but subtly threw his entire team under the bus in the process.

After LSU got their homecoming invaded by the Trojans, the Tigers look to do the same to the 21st ranked Florida Gators as they head to Gainesville this weekend. The game is at 3:30 p.m. on CBS. Florida is currently the one-point favorite, but with LSU coming off of an embarrassing loss at home, expect the Tigers to come into Ben Hill Griffin Stadium with fury. This should be another close battle between the two SEC rivals.

Previous NFL Preview: The Undefeated Chiefs Host the 2-1 Redskins
Next Florida Lands PG Andrew Nembhard (28th in the Class of 2018)