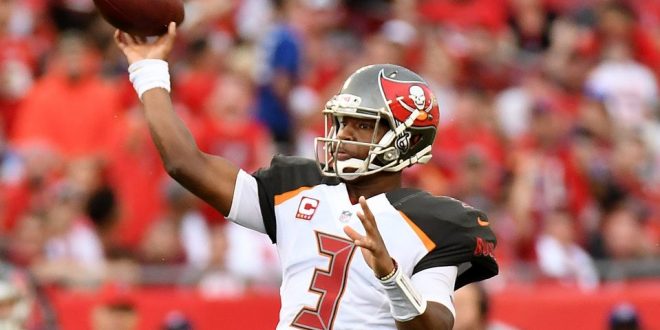 Tampa Bay Bucs placekicker Nick Folk nailed a 32 yard field goal at the end of the game to give them a 25-23 win over the winless New York Giants in Tampa.  After a shaky second game, Bucs quarterback Jameis Winston had a solid game, throwing for 332 yards, three touchdowns, and no interceptions against the Giants.

Winston Takes One For the Team

Last week Winston did throw for 328 yards but he also threw three interceptions. This week, he took much better care of the ball and got the Bucs going early with touchdown passes to wide receiver Mike Evans and then to a left wide open tight end O.J Howard and at the end of the first quarter, the Bucs had a 13-0 lead.

But that lead would not last long as the Giants came back to take the lead in the game.  In the fourth quarter, Winston threw his third TD pass of the day to tight end Cameron Brate but the Bucs were still down 23-22.

On Tampa Bay’s final possession, Winston led them down the field and the team got into field goal range for Folk, who had earlier missed an extra point and two field goal tries in the game.  But Folk nailed the 34 yard try for the win.  The kick was all Folk, but the setup was all Winston. After the game, Winston reassured everyone that he never lost faith in his teammates. Coming from behind is a difficult thing to do in the NFL but the Bucs pulled it off at home.

A Win is A Win

The Bucs are 2-0 at home for the first time since 2008. The New York Giants are 0-4 this season. The Buccaneers have been touted as Super Bowl contenders and those kind of teams rarely allow a winless team to beat them at home. The Bucs beat the Chicago Bears easily, but combined with the Giants, the two teams have a record of 1-7. When faced with the decent Minnesota Vikings (2-2), the Bucs faltered. A win is a win, but if any team without a losing record can best them, the Bucs will have to wait yet another year before playoff dreams become reality.

Next week will be a huge test for the Buccaneers when they host the 2016 Super Bowl champion New England Patriots on Thursday night.   The Pats are currently 2-2 after losing to the Carolina Panthers on Sunday.