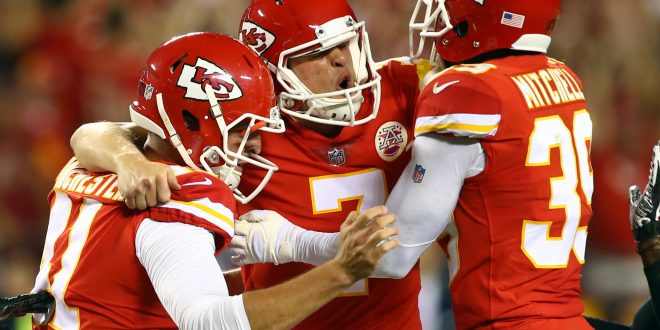 The only unbeaten team left in the NFL after Week 4 of action is the Kansas City Chiefs as they come from behind to beat the Washington Redskins at home 29-20 on Monday Night Football.

We remain undefeated after a 29-20 Monday night thriller. #WASvsKC

Dramatic Finish for the Chiefs

The Chiefs were able to close out perhaps their most difficult opponent this season.

Early on in the game, Kansas City looked like they were certainly going to take their first L of the season. Washington led early 10-0 but KC got a touchdown pass from Alex Smith to cut the lead to 10-7.  By the fourth quarter, the game was certainly in doubt.  With the game tied 17-17, Kansas City went on a time consuming drive but it bogged down and they had to settle for a 43 yard field goal by Harrison Butker to give them the lead.  In the final minutes of the game, the Redskins tied the game 20-20 but Smith led his team down the field and Butker kicked another field goal; the big play of the drive coming on a 37 yard pass to receiver Albert Wilson.  The Redskins got the kickoff and tried a series of laterals but KC’s Justin Houston picked up a loose football and ran it in for the score to seal the win.

Alex Smith on a Winning Drive

Alex Smith perhaps has reached his peak 13 seasons deep into his NFL career.  He is having arguably his finest NFL season.  In a post-game interview, Smith said that he can see the hard work paying off.

In comparison to last season, Smith has improved greatly as a quarterback. Last season, it took him until Week Eight to throw his eighth touchdown pass; this season, he accomplished that in half of the time.

He now has eight through four games. pic.twitter.com/0ZbQ2hnmGe

Smith and his team have set the bar high for this season.

Kansas City will face Houston Sunday night as they play against the Texans while Washington will host San Francisco on Sunday.