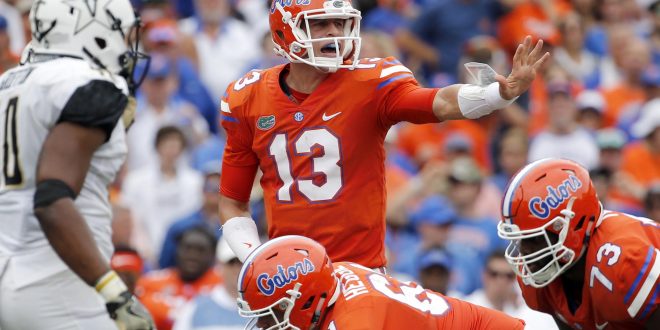 For the second week in a row Gator football players have earned weekly conference honors. This week, two players earn their first accolades in their career. Freshman Malik Davis became SEC Freshman of the Week. While, Brett Heggie redshirt freshman was named Offensive Lineman of the Week.

Starting all four games the season, Brett Heggie has become an imperative part in Florida’s improving offense. This became evident against Vanderbilt when the Gators ran for a season-high 249 rushing yards and 5 touchdowns.

Heggie’s assistance in the game gave Florida the ability to rush for five touchdowns for the first time since Nov. 1, 2014 when the team did so against Georgia.

After the win against Vandy, Heggie earned the title of co-offensive player of the game and is rated the highest among all of Florida’s offensive lineman.

The Gators are back in action for Homecoming on Saturday when they face LSU at 3:30 p.m. on CBS. Last year, Florida’s defense stopped LSU’s 75 yard drive on the goal line in Tiger Stadium to earn its spot in the SEC title game. This year, Heggie hopes preparation and chemistry among the offense will help the Gators bring home another win in The Swamp.