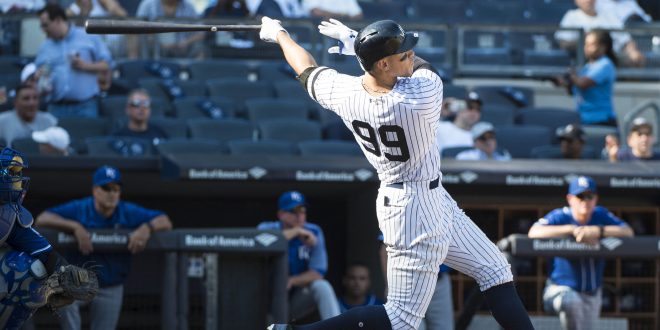 This historic season – single-season record in home runs – would have not be the same without Aaron Judge‘s “out of this world” rookie season.

Judge was one of the most sensational characters that the MLB offered this season. His batting power gave enough reasons to MLB At-Bat subscribers to constantly keep an eye on New York Yankees’s games throughout the whole season – especially during the first half of it. After breaking Mark McGwire’s all-time rookie record in home runs (49), Judge (52) is the perennial favorite to win both the Rookie of The Year Award and Most Valuable Player of The Year in the American League.

Aaron Is The Present and Future for The Yankees

At the beginning of the season, the Yankees hoped to do their best to be competitive in an American League East Division that was expected to be dominated by their bitter rivals, Boston Red Sox; the Red Sox ended up winning the division, of course. But this season was supposed to be a season especially focused on developing young talent. The Yankees have one of the best farms in baseball. Future is bright for this team, but it did not expect Judge’s sensational 2017 performance.

According to The New York Times, Judge became the first rookie in history and fifth Yankee player to ever hit 50 home runs in a single season; the other four Yankee players were Babe Ruth, Mickey Mantle, Roger Maris and Alex Rodriguez.

The Yankees constantly won games during the first half of the season. It was mainly because of Judge’s pitch reading and hitting anticipation. Of course, his hitting power gave him enough credentials to get invited to participate in the 2017 Home Run Derby at Miami.

There was a polarizing environment during the Home Run Derby. Mainly because Judge was a serious treat to dethrone the former defending Home Run Derby champion and Miami fan favorite Giancarlo Stanton. Eventually, Judge ended up winning easily the Home Run Derby. The Judge Experience was jaw-dropping. He ended up hitting 47 home runs overall and beat Miguel Sanó in the final.

Unfortunately for Judge, his second half of the season lowered his overall numbers – especially at the beginning of it. During late July and early August, there was a stretch that Judge’s hitting average was under .200. Something that affected the Yankees in their race for the AL East Division crown.

Judge ended up getting back on his game and helped his team to gain a ticket to the MLB postseason. The Yankees will be hosting the Minnesota Twins at the American League Wildcard Game on Tuesday night; Luis Severino and Ervin Santana will be the starting pitchers for both teams respectively. Now it is time for Judge to show what he can do offensively to help his team on the postseason.