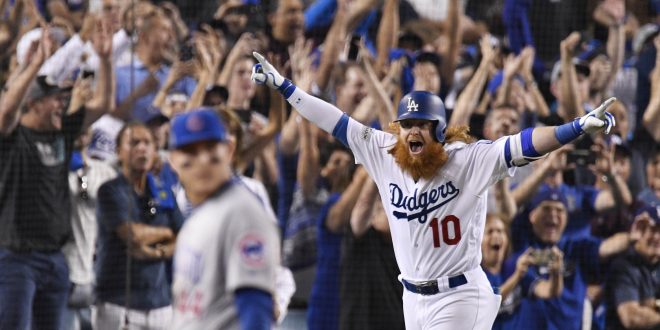 Cubs Host Dodgers in Game 3 of the NCLS

The National League Championship Series moves to Wrigley Field in Chicago tonight for game 3 of the match up between the Cubs and the Los Angeles Dodgers. The Dodgers took care of business at home and now lead the series 2-0. On the other hand, the Cubs look to get a win in hopes of turning the series around.

Cubs Look For a Comeback

A year ago, the Cubs found themselves in a bigger hole. Down 3-1 to the Cleveland Indians, they were perfect in the last 3 games to turn the result around and be crowned World Series Champions. They’re in need of that same kind of magic now.

In order for Chicago to continue their title defense, their offense needs to improve. Head Coach Joe Maddon knows that to beat the Dodgers, his team needs to hit better.

While the Cubs did have 9 runs in game 5 of their Divisional Series against the Washington Nationals, they have only managed 20 runs in seven games this post season. They’ve been hitting .162 this postseason and against the Dodgers they’ve only had 3 runs in the 2 games of this series so far.

The combination of Kris Bryant and Anthony Rizzo have been shadows of themselves from last year’s World Series. Bryant and Rizzo are hitting .179 and .154 respectively. The 2016 World Series MVP, Bryant, has had 13 strikeouts so far.

On the other side, the Cubs are starting Kyle Hendricks at pitcher tonight. His two starts in the NLDS ended up with wins for Chicago. However, the Cubs know that in order to win and turn this series around, they’re going to have to score.

Dodgers Halfway to the World Series

On Sunday night, Justin Turner took the Dodgers one step closer to knocking out the Cubs and reaching the World Series. His 3-run walk-off home run, gave Los Angeles the 4-1 win in the bottom of the ninth, and an overall 2-0 series lead.

WALK-OFF! Justin Turner's 3-run homer in the bottom of the 9th gives the Dodgers a 2-0 NLCS lead over the Cubs. #SCtop10 pic.twitter.com/pYXbNqEYa8

Tonight, the Dodgers travel to Chicago looking to increase their series lead. The starting pitcher tonight is Yu Darvish, showcasing the depth in pitching staff the Dodgers boast. Darvish has only 1 postseason start, a 3-1 win against the Arizona Diamondbacks where he allowed only one earned run in his five innings.

The Cubs offensive struggles have in part to do with the strength of the Dodgers’ pitching. Head Coach Dave Roberts believes he can call on anyone from the bullpen and that they will execute their pitches. The Dodgers have remained perfect this post season. Aside from their pitching, their offense has been explosive. Throughout their seven postseason matches, they have 40 runs.

If the Dodgers win tonight, talks about a sweep of the Cubs can potentially become a reality. The Cubs have looked tired and the Dodgers look like they’re seeking redemption for when the Cubs eliminated them in six games in last years NLCS.

Game 3 of the National League Championship Series between the Chicago Cubs and the Los Angeles Dodgers is set to begin at 9 p.m. on TBS.