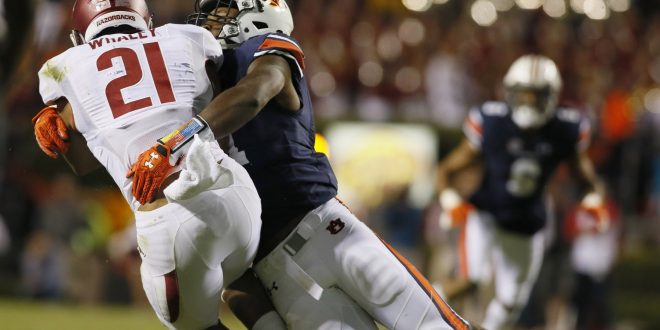 The University of Auburn Tigers (5-2) travels to Fayetteville, Arkansas, for their third road-night-game, taking on the University of Arkansas Razorbacks (2-4). Both teams are coming off road-game losses last Saturday.

The 21st-ranked Auburn Tigers lost 27-23 on the road last week against the Louisiana State University Tigers. LSU lost to the Troy Trojans in week 3, but Auburn wasn’t the only one to lose to an SEC team last week. The Razorbacks are also coming off of a loss on the road. After a low-scoring 41-9 loss against No. 1 Alabama, Arkansas’ head football coach says his team is ready for a home game.

Last Saturday, Arkansas quarterback Cole Kelley was thrown into his first start of his career against the Crimson Tide. Kelley completed half of his passes, while throwing for 200 yards and a touchdown pass. 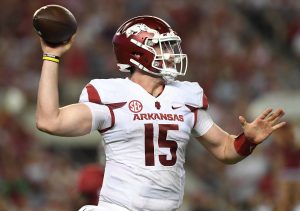 The redshirt freshman also threw one interception. Kelley filled in for quarterback Austin Allen, who is recovering from a shoulder injury that occurred while playing the South Carolina Gamecocks.

According to Al.com, “Arkansas coach Bret Bielema now believes there’s a possibility his starting quarterback could play against Auburn.”

Bielema says Allen has been preparing for Saturday’s game, while also mentioning other players who could make an appearance on Saturday, as well.

Bielema says this game will be a big one for his team.

Head football coach Gus Malzahn says this a big game, because the last time his team played at Arkansas, they had four overtimes before losing in the end. “We’ve had a good week of practice,” Malzahn said. “Our guys are ready and looking forward to traveling.”

Malzahn discusses freshman Malik Willis’ progression as a quarterback for the team.

Additionally, this week Coach Malzahn mentioned players and their current status. “Mike Horton practiced in a limited basis, but looked pretty good,” Malzahn said. “Marlin Davis practiced fully and will be ready for Saturday’s game.” He also said that Tre’ Williams practiced well, Tray Matthews was limited, but he will practice this week. “Derrick Brown, Deshaun Davis and Darrell Williams all practiced and will play.”

The teams will meet at War Memorial Stadium Saturday at 7:30 ET.

Kate Venezio is a fourth-year telecommunication-news student at the University of Florida. Kate does it all: Behind the camera she captures emotional moments as a photographer for the University of Florida Athletic Association. She's comfortable being in front of the camera, too. Kate interviews players, coaches, fans and family members for pre- and post-game coverage as a beat reporter for ESPN Gainesville/WRUF-FM. In addition, Kate produces the sports segment for the weekly WUFT News program. There, she's responsible for writing the script in its entirety to include production commands. The presentation includes video highlights and interviews taped and edited, and Kate then live anchors the final package on a daily deadline. In addition, she writes stories for wruf.com where she informs sports fans of local, state, and national trending topics. Kate also utilizes social media as a tool to help get the stories in front of viewers.
@@kate_venezio
Previous Preview: District Play Continues for P.K. Yonge Football
Next Gators Soccer Bounce Back With Win Against Kentucky