Home / Baseball / Astros will face the Dodgers at the World Series 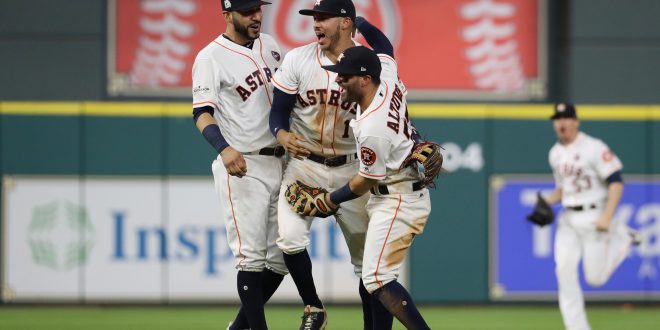 Astros will face the Dodgers at the World Series

The Houston Astros are now only four games from their first ever World Series championship.

The Dodgers led the series with 104 victories but the Astros weren’t far behind with their 101 wins.

The Dodgers have not won a World Series since 1988 and the Astros have never won in their 55 years and with both teams coming from such big markets it will be a highly followed world series.

Six of the 25 players on the Astros NLCS roster were acquired through the amateur draft.  The Astros had the No. 1 pick in three straight drafts from 2012-2014 and all of those picks helped get them to the World Series, though only one is still in the organization.

The first of those three straight No. 1 picks from 2012-14 was used on Carlos Correa, a high schooler out of Puerto Rico. Derek Fisher, Dallas Keuchel (will start game 1), George Springer and Lance McCullers are other key drafted players by the Astros. At one point McCullers was considered the top high school pitching prospect in the 2012 draft class, but a strong commitment to Florida caused him to slip into the supplemental 1st round. The Astros convinced him to turn pro with a $2.5 million bonus. McCullers recorded a four-out save in Game 7 of the ALCS.

Players that were traded into the Astros include, Chris Devenski, Marwin Gonzalez, Francisco Liriano, Brian McCann, Joe Musgrove, Brad Peacock, Justin Verlander (will start game 2), Ken Giles and Evan Gattis. Gattis quite baseball in college and spent several years traveling the country and even worked as a janitor. He returned to college in 2010 at the University of Texas of the Permian Basin. In his draft year and was drafted in the 23rd round by the Braves.

In game 2, Verlander threw a 124-pitch complete game as the Astros won, 2-1, to take a 2-1 series lead. In game 6, with the Astros facing elimination, Verlander threw seven shutout innings as the Astros beat the Yankees, 7-1. The victory evened up the ALCS at three victories apiece, forcing Saturday’s game. Verlander joined John Smoltz as the only pitchers to have three career elimination-game starts of at least seven scoreless innings after his Game 6 effort.

Now these key players need to need to keep up their ability to keep their athleticism up.

The Astros will play the Dodgers on Tuesday in Los Angeles.