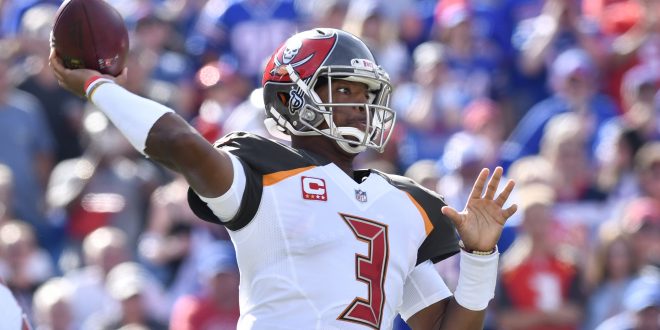 The Tampa Bay Buccaneers are now 2-4 following a 30-27 loss to the Buffalo Bills Sunday. The Bills capitalized on a late fumble, hitting a game-winning field goal with 14 seconds remaining in the fourth quarter. Bucs quarterback Jameis Winston came to play, throwing for 384 yards and three touchdowns. However, subpar defense and key turnovers prevented Tampa Bay from picking up their third win of the season.

The Buffalo Bills are averaging under 300 yards per game in total offense. On Sunday, they performed like a top-5 offense. Bills quarterback Tyrod Taylor threw for 268 yards and a touchdown, but most importantly, didn’t turn the ball over.

Buffalo carved up the Buccaneers’ defense with a balanced gameplan. Taylor was efficient through the air but also added 53 yards rushing. Workhorse running back LeSean McCoy added to the cause with 91 rushing yards of his own and two touchdowns on the ground. Backup Mike Tolbert also contributed 29 yards to the rushing attack.

Trailing 27-20 with about three minutes left, the Buffalo offense marched down the field to tie the game at 27. Following the Buffalo drive, the Bucs offense seemed to be rolling but receiver Adam Humphries fumbled in Tampa Bay territory. The Bills failed to convert the Bucs’ first two giveaways into points, but the final Tampa Bay turnover would be enough to give the Bills the final edge.

On the next possession, Taylor and the Bills offense converted a third and nine, moving the ball up to the Tampa Bay 21-yard-line. Buffalo then turned the Bucs fumble into a last-minute Stephen Hauschka field goal which all but sealed the Bucs’ fate.

The Bills now lead the NFL in turnover differential at +10.

After the game, Bucs head coach Dirk Koetter said it hurts to lose but he believes in his players. Koetter that the team’s personnel is good enough but the execution needs to be better.

The Bucs had no problems moving the ball, but at times they failed to finish drives. Specifically, in the first half, their first three drives stalled late in Buffalo territory. Two drives resulted in field goals and the other ended in a Winston fumble. Winston said his unit needs to score early and score touchdowns. He added that he loved the effort he saw out of the group but knows they need to finish better.

Buffalo scored a touchdown on their first drive of the second half, extending their lead to 17-6. Despite this, the Bucs offense found a groove and rallied the team back.

A ten-play, 54-yard drive capped by a 12-yard touchdown pass from Winston to star wide receiver Mike Evans gave the Bucs a 27-20 advantage. Unfortunately for Tampa Bay, their defense would proceed to squander the lead away.

Up next, the Bucs will host the Panthers next Sunday at 1 p.m. This will be Tampa Bay’s first divisional game of the season. In 2016, the Bucs went 4-2 against NFC South opponents.

I'm an above-average golfer with surprisingly great touch around the greens. Click on my twitter link for some sports talk.
@Ry_McGinn
Previous Gator Volleyball: UF Wins in Four Against Auburn
Next Gator Soccer Gets Second Straight Win In Victory Over Volunteers