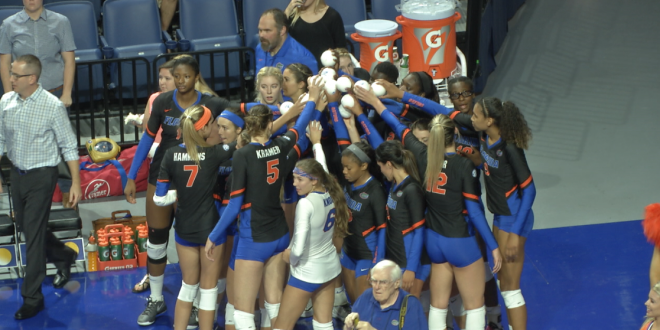 It was a game of ups and downs for the Gator volleyball squad as they were able to hand Auburn their fifth loss in a row on Sunday as the Gators beat the Tigers in four games.  Florida started off strong with good serving and aggressive offense but cooled off in the second set in which they lost.

Service errors were a major issue with six in the second set and four in the third. The Gators once again had to make an adjustment not for what the other team was doing right, but for what they were doing wrong.

Head coach Mary Wise and her staff were able to make those adjustments. Wise once again was able to get her players’ minds in the right place to win the game.

Before the game Wise spoke of Auburn’s defense in an interview. She praised the back row especially for their ability to dig out the ball and frustrate the offense they faced. Wise said that the Gators needed to stay patient if they wanted to overcome that back row. It was clear early that the team would learn this the hard way.

The UF offense was stymied early by this back row defense of Auburn. Rhamat Alhassan and Carli Snyder were at the head of this hard defense. In the second set of the game, the Auburn defense, along with the error problem on the Gator side, would result in a crushing 25-17 loss, one of Florida’s worst losses of the year.

The Gators knew they would have to find another way to win the game.

Carli Snyder, who just surpassed 1000 kills on her career this year, was able to realize early that her offense was not needed. Instead her ability to dig balls and give it to the hot hand would help the Gators win the game. Snyder finished with a below average, for her, nine kills on the game but had a staggering team-leading 18 digs.

Rhamat Alhassan was in a similar situation as Snyder; she was held early to two kills in the first two sets. Instead of getting rattled, Alhassan took her out on the defensive side. With seven blocks and a dig late in the game, Alhassan adjusted her game and was a big factor in the win.

With the Auburn back row defense stopping the Gator attacks, the squad decided to come in from all angles. Six different players registered a kill in the match including assist specialist Allie Monserez. Monserez’s sixth kill of the season game at a critical time in the third set. Monserez also tallied 41 assists and was able to give it to everyone on the court from every angle.

Senior Shainah Joseph also stepped up in the win. Recording 13 kills in the match, Joseph was one of the few who got hot offensively during the game.

It was players like Monserez and Joseph offensively that helped the gators pull of the win in four sets.

Florida returns to action on Friday against a hardened South Carolina who swept the Auburn Tigers last Wednesday. The Gamecocks are 10-9 this season but the Gators will not take them lightly. They expect it to be an offensive game. Coach Boos talked about how good the right side of their lineup is.  The match is at 7 pm in the O’Connell Center.