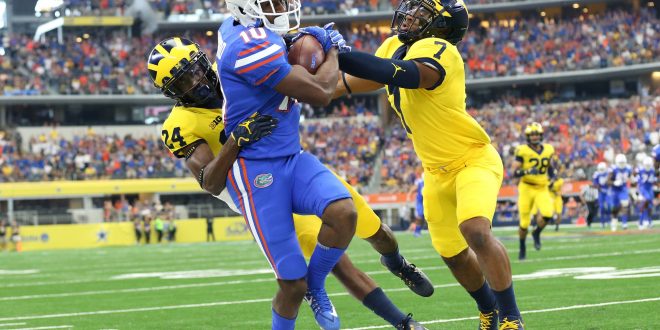 The Florida Gators (3-3) look to be completely outmatched this Saturday as they play the No. 3 Georgia Bulldogs (7-0) in Jacksonville, Florida. However, the Gators have won the previous three match-ups which serve as a point of motivation, according to Hammond. The win streak started unexpectedly, in a scenario eerily similar to this game. The Gators were in shambles with a 3-3 start coming off a 42-13 homecoming loss to Missouri as they set to play No. 9 Georgia Bulldogs. The Gators pulled off the biggest upset in recent program history winning 38-20, effectively ending their rival’s playoff dreams.

Sophomore Wide Receiver Josh Hammond has played a significant role in Florida’s receiving corps this season. Hammond has 11 receptions and 138 receiving yards this season. Despite missing two games with an injury, Hammond is on pace to surpass his reception yardage total from last year. Though, Hammond is still looking for his first career touchdown with the Florida Gators.

The Gators have used this bye-week effectively in trying to help quarterback’s Feleipe Franks decision making. Florida Head Coach Jim McElwain and Offensive Coordinator Doug Nussmeier have taken a lot of time to explain to Franks what decisions he should make in certain scenarios. Hammond believes that Franks decision making in the second half of the season will be important towards the offense’s success.

It's one of college football's best rivalries." — @CoachMcElwain on #UGAvsUF

The Gators fit the profile for a team that would experience inner strife. According to Hammond, the team remains close through their constant support and ability to get ready to play. This exudes the Gators spirit as they played to the wire in their last two games ending in narrow defeats. However, this weekend’s game is not expected to be close with the Gators a 14 point underdog. Florida is fully aware that they are the underdog for the upcoming game and are using it to their advantage. The Gators are set to play Georgia this Saturday at 3:30 pm in Jacksonville.