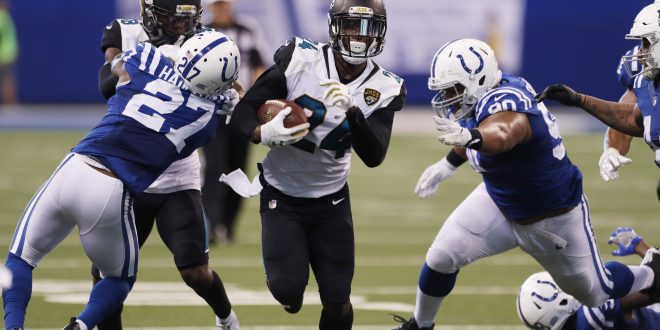 Jacksonville’s Best Start In a Decade

The NFL season is always full of surprises; a main reason for its’ major popularity in the United States. So far, through week 7, no team has stunned fans more than the Jacksonville Jaguars; they’ve impressed everyone.

It has been nearly a decade since Jacksonville made the playoffs, or even had a winning season. New head coach Doug Marrone has the defense playing exceptionally. They’ve been one of the top defenses in the NFL. Marrone’s defense leads the league in sacks and turnovers.

The front seven and defensive back units have both held their own, a mutually beneficial relationship. Outstanding performances from new additions like Calais Campbell have catapulted the Jaguars pass rush. Calais also commented about how playing well in all facets of defense creates an environment that is difficult to score against. On Sunday they recorded 10 sacks on Colts’ QB Jacoby Brissett. A total 33 sacks on the season means the Jaguars pass rush is on pace to potentially be the best ever. Currently they are projected 75 sacks on the season, the current sack record being held by Mike Ditka’s Bears. Yes, I just compared the Jacksonville Jaguars defense to the 85′ Bears, the jaguars defense is flat out good.

This weekend’s game against the Indianapolis Colts proved that Jacksonville can be competent on offense as well. Until the Colts game, the Jaguars relied heavily on rookie running back Leonard Fournette to move the chains. He was absent on Sunday with an ankle injury, which paved the way for former Alabama running back TJ Yeldon to step into the starting role Sunday. But for once it was not the running game that carried the offensive unit; Blake Bortles had his best game of the season. Although the running game is averaging the most yards per game in the NFL the passing attack has been lackluster thus far. That changed with Bortles throwing for a career high 250+ yards in the first half.

This may be the year the Jaguars take a step forward. They can continue to be above .500 and contend for an AFC South championship.