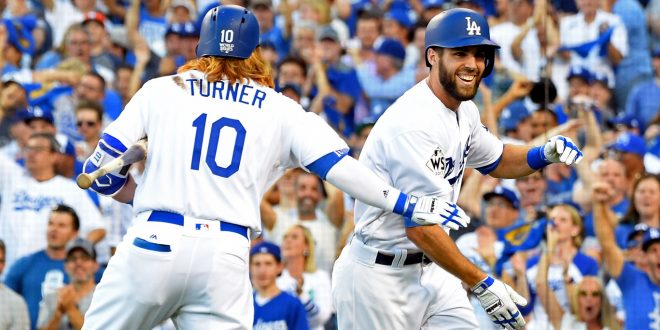 Record-breaking temperatures, quick finishes and stellar pitching would headline Game 1 of the World Series between the Los Angeles Dodgers and Houston Astros. With temperatures peaking at 103 degrees, the Dodgers defeated the Astros 3-1 in scorching Los Angeles heat to take a 1-0 series lead.

The Dodgers would jump out to a quick start on the first pitch of the game. Dodgers center fielder Chris Taylor would blast a home-run to left field to give the team an early 1-0 lead.

When you go yard on the first World Series pitch your team has seen in 29 years. pic.twitter.com/Ejo2GqfVQq

The Astros, however, would respond in the top of the fourth inning. Third baseman Alex Bregman would launch a solo home run to left field to even the score at 1-1. Then, in the bottom of the sixth inning, the Dodgers would regain the lead with a two-run homer from third baseman Justin Turner, putting the team up 3-1.

Turner’s home-run would prove to be the dagger as the Dodgers hold on to win 3-1. The game would last just two hours and 28 minutes, making it the fastest World Series game since the 1992 matchup between the Toronto Blue Jays and Atlanta Braves.

Dodgers pitcher Clayton Kershaw would steal the show. Kershaw would finish the game with 11 strikeouts and one earned run through seven innings of work. Heading into the World Series, the Astros boasted the best offense in baseball with 5.53 runs per game in the regular season. Kershaw says there was little room for error against a tough Houston lineup. Meanwhile, Astros starting pitcher Dallas Keuchel would finish the game with three strikeouts and three earned runs in just over six innings.

Game 2 of the series is set for 8:09 p.m. EST tonight at Dodger Stadium. Justin Verlander will take the mound for the Astros, while Rich Hill will get the starting nod for the Dodgers.