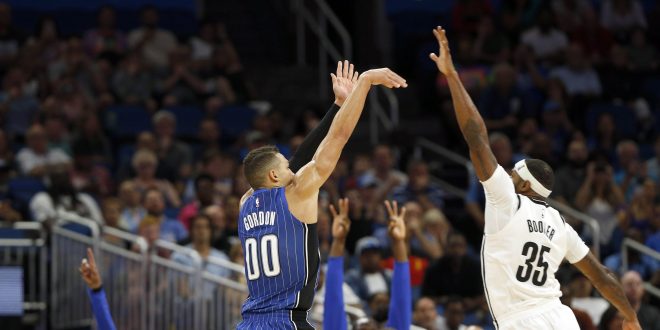 Orlando Magic forward and dynamic dunker, Aaron Gordon, showed continued improvement as he dropped 41 points and the game-winning three pointer against the Brooklyn Nets. This huge performance helped power the Magic to their best start, 3-1, since the 2011-2012 season.

This was most likely the biggest shot of Gordon’s young career. For the past couple years most defenders would sag off of Gordon and dare him to shoot the open jumper, but after countless hours of shooting drills he is finally making them pay.

Making History: @Double0AG is the first Magic player to score 40+ points and go 5-for-5 or better from 3 (@nbastats). pic.twitter.com/D6uugO2QUB

The University of Arizona alum knocked down five from downtown, much to the delight of the 16,015 at Amway Center. Through his first two games of the season, Gordon is averaging 27.5 points and 11.5 rebounds.

Last night’s game against the Nets was a testament to the gritty nature of these Magic, as they overcame a 10 point fourth quarter deficit to get the win. This is a surprising characteristic for Orlando because they are one of the NBA’s youngest team, with an average age of 25.9 years.

Although it’s only four games out of the marathon that is the NBA regular season, there is a lot of good to take from Orlando’s blazing start. Their last two games saw them win in two completely different fashions against two completely different teams. Yesterday’s come-from-behind win against the young Nets was the complete opposite of Saturday’s 21-point rout of the perennial power, Cleveland Cavaliers. While we all know Orlando is not the same caliber team as Cleveland, at least it appears that on any given night the Magic can play with anyone. In addition to coming from behind in dramatic fashion, Tuesday’s win also served as revenge for the Nets giving the Magic their only loss of the season just four days earlier.

The balanced offensive attack keeps opposing defenses honest because they don’t have one guy to key on. This young Magic squad has three players averaging at least 20 points, including Gordon, Nikola Vucevic and Evan Fournier.

The much-improved Magic will look to continue their surprising start against the Spurs Friday in Orlando.