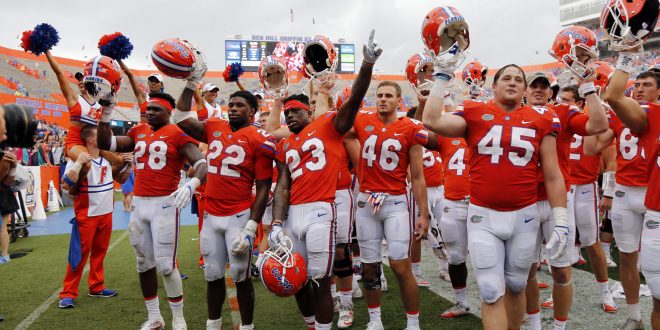 The Gators are 3-3 going into this weekend’s matchup against the undefeated No. 3 Georgia Bulldogs. While many anticipate a Georgia victory, sophomore starting defensive back Chauncey Gardner says Florida is not as much of an underdog as it seems to be on paper. He says a lot of people are looking for the Gators to lose, but the team is not satisfied.

The Gators are optimistic about their own ability

Gardner started with the Gators in 2016 as a reserve defensive back, but emerged last year as a starting safety by the end of the season. So far in six 2017 games, Gardner totals 37 tackles, which tops last year’s total of 32 in 13 starts. As a defensive star for Florida, Gardner says the Bulldogs shouldn’t be so confident they can score against the Gator defense he claims to be the best in the SEC.

Both teams will be fresh from their bye week coming into this Saturday’s game. Before that break, the Bulldogs came from seven straight wins while Florida went away from two home losses. College football fans find it easy to notice the obvious weaknesses of the Gators against the threatening strengths of their SEC rivals.

However, Gardner says what sets the Gators apart is their internal focus, commenting:

Georgia’s starting quarterback Jake Fromm receives a lot of media attention and praise. Gardner admits that Fromm is a great quarterback, but says he throws simple passes that anyone could throw, stating, “anyone can throw a slant.” He is confident in his own ability to defend against Fromm and Georgia’s strong offensive line and that of the Gator defense.

The strengths of the Gators

Florida has been known this season for the youth of its roster. Gardner says the freshmen are playing like experienced players. In particular, he notes the success of freshman cornerback Marco Wilson, who he says came in strong and has continued to play like that.

Gardner acknowledges the strength of Georgia’s running backs, but ensures he and the rest of the Gator defense can handle it. He says, “we’re not dwelling on it. We’re just gonna go out there and play football.”

As always, the teams will face off on neutral ground in Jacksonville. Kickoff is set for 3:30p.m. Saturday.

I grew up in the Washington, DC area and now I'm a Gator. I'll always be learning more about myself, others and the world around me. And I'll always be talking about sports.
@kelsey_godman
Previous Gordon’s Career Night Propels Magic to 3-1 Start
Next LSU prepares to face No. 1 Crimson Tide during bye week