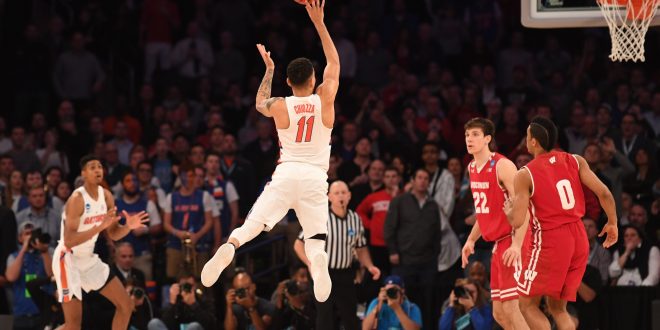 Gators, Chiozza Ready for the Season

As a new college basketball season quickly approaches, preseason Top 25 polls have been released, including the AP Media Poll on Wednesday. The Florida Gators are ranked eighth on that one, but the ranking “doesn’t matter” to Gators point guard Chris Chiozza.

Not Concerned About Rankings

Chiozza is all too familiar with low preseason rankings. Before his freshman year in 2014, Florida was ranked No. 7, similar to this year, and had just come off a Final Four loss to Connecticut in the previous season. They finished 16-17 overall and 8-10 in the SEC that season (2014-15), out of the Top 25 postseason rankings.

In his first season, Chiozza played in 33 games and started 11. However, he said he doesn’t want to repeat what happened during his first year with the team.

Chiozza even called it the worst year of basketball in his life.

Chris Chiozza said that his team was ranked 7th his freshman year and finished with a losing record. Said he doesn't put much into rankings

When asked if he needs to say anything to the younger players who “might get mesmerized by a low digit like that,” Chiozza said he has to remind them that the ranking doesn’t matter, even if it “makes you feel good.”

Taking On A Bigger Role

This season, the Gators are looking for a quick start, while avoiding the ranking as a distraction. Chiozza, now a senior, figures to be a regular in the lineup, even though he’s not considered a returning starter from last season. In 2016-17, the Memphis, Tenn. native played in all 36 regular season games, but didn’t start in any of those.

With several leaders from last year’s roster gone, Chiozza is poised to fill that void left by Kasey Hill, Devin Robinson and Canyon Berry, among others, and has taken on a “face of the franchise” role of sorts. His notable 3-point overtime shot at the buzzer against Wisconsin in the Sweet Sixteen last season caught the attention of college basketball fans around the country and set his place in all-time moments in the history of Florida athletics.

Here it is: Mick Hubert's final call on Chris Chiozza's buzzer beater to send Florida to their 5th elite 8 in the last 7 years. pic.twitter.com/QBHEoHeR3Z

This season, he’ll look to continue contributing offensively and use his ball-handling skills. Chiozza led the SEC in assist-to-turnover ratio last season.

However, he must also focus on his play defensively. Chiozza talked about how the team can pick up it on that side of the ball. He said they have the athleticism to be a good defensive team, but they have to want to do it.

Chiozza also said the team talks as much as it can in practice to help everyone communicate better when playing defense. In order to foster communication, they simulate real-game situations to help with this.

Though he’s not the only returning player from last season’s Elite Eight team, Chiozza has some newer teammates to work with. There are several freshmen on the roster, including Chase Johnson, Deaundrae Ballard and Mike Okauru, who are all subs for the Gators’ first exhibition game of the season.

Chiozza said they know each others’ games now and have pretty good chemistry already. Although he also added that it’s only going to get better throughout the season.

Chiozza and the Gators aren’t far away from tipping off a new season. Florida will take on Jacksonville University in an exhibition game tonight at 7.