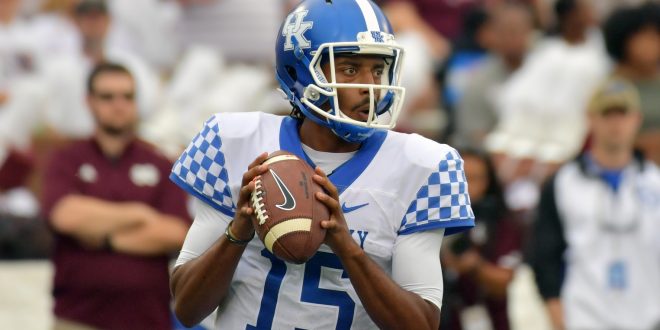 The Bowl-eligible Kentucky Wildcats (6-2, 3-2 Southeastern Conference) host the University of Mississippi Rebels (3-5, 1-4 SEC) Saturday in a 4 p.m. matchup. The Cats are hoping to earn their seventh victory this weekend.

Last week, the Cats bounced back, defeating the Tennessee Volunteers 29-26, and earning the No. 3 spot in the SEC East. UK head coach Mark Stoops says it was important to win against Tennessee, especially after losing a heartbreaking game against the Florida Gators. If that loss wasn’t enough, Kentucky was then obliterated by Mississippi State 45-7.

Despite the Kentucky win, the Cats’ offense struggled to hold on to the ball. Tennessee forced four fumbles last week, and Stoops says his team must improve on keeping the ball in their possession.

“Explosive” was the word Stoops used to describe the Rebel offense, and that is what they have been.

The Rebs are eighth nationally and first in the SEC at 338.1 passing yards per game. According to UK Athletics, in a recent interview, Stoops called their offense “very talented.”

“You know, I’m so caught up in the one-week season that I’m in all the time, but it could possibly be the best group, more than likely the best group, we’ve played all year. Just very talented players. They’re explosive. They’re big and strong. They make competitive plays across the board.”

Senior quarterback Stephen Johnson will play this week after injuring his shoulder in the Tennessee game. Last week, Johnson completed six passes for 46 yards. He also rushed six times for 84 yards and a touchdown.

“Johnson had 84 rushing yards, which is the most by a UK quarterback in an SEC game since Matt Roark against Tennessee in 2011,” UK Athletics wrote. With 33 seconds left in the game. Johnson launched himself into the end zone for the winning touchdown against Tennessee.

OH MY STEPHEN JOHNSON!!!@UKFootball 29-26 with 33 seconds left in the game. pic.twitter.com/PXSaiPAYDX

That was the most passing yards ever by an Ole Miss quarterback making his first career start. According to UK Athletics, Ta’amu’s 444 yards of total offense (368 passing, 76 rushing) are the fifth-most yards in a single game in Ole Miss history.

Ole Miss interim head coach Matt Luke said Ta’amu had some negative parts in the end of the game, but overall he thinks he’s done an outstanding job.

Kate Venezio is a fourth-year telecommunication-news student at the University of Florida. Kate does it all: Behind the camera she captures emotional moments as a photographer for the University of Florida Athletic Association. She's comfortable being in front of the camera, too. Kate interviews players, coaches, fans and family members for pre- and post-game coverage as a beat reporter for ESPN Gainesville/WRUF-FM. In addition, Kate produces the sports segment for the weekly WUFT News program. There, she's responsible for writing the script in its entirety to include production commands. The presentation includes video highlights and interviews taped and edited, and Kate then live anchors the final package on a daily deadline. In addition, she writes stories for wruf.com where she informs sports fans of local, state, and national trending topics. Kate also utilizes social media as a tool to help get the stories in front of viewers.
@@kate_venezio
Previous Gators, Chiozza Ready for the Season
Next Georgia Brings New Ranking to South Carolina