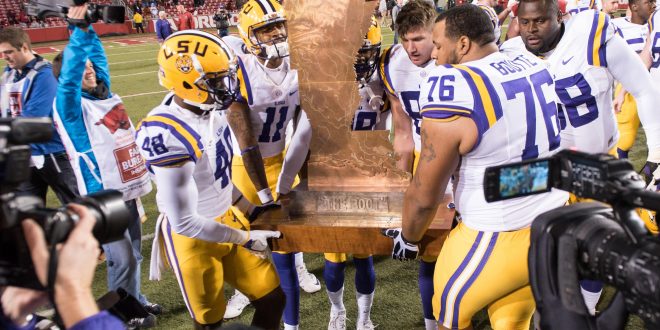 The two SEC West teams go head to head competing for the Golden Boot. This tradition between the rival teams has taken place since 1996, with the Tigers winning 12 of the 20 meetings between the teams.

According to LSU Sports, the trophy is molded from 24-karat gold in the shape of the states of Arkansas and Louisiana, the trophy stands four feet in height, weighs nearly 200 pounds and is valued at $10,000. It is believed to be the heaviest trophy awarded in a college football rivalry.

Last week the Crimson Tide defeated LSU in a 24-10 road game. In the fourth quarter, LSU head coach Ed Orgeron took out senior starter Danny Etling, replacing him with freshman Myles Brennan. The quarterback switch was in efforts to get the offense going. Brennan completed three of five passes for 18 yards and was sacked twice in nine snaps.

According to The Times-Picayune, Orgeron said, “I thought he did good. The situation obviously, there was some pressure. He made some good decisions.”

During the Alabama game, Etling completed 12 of 26 passes for 137 yards. Etling also had one interception and was sacked four times. Despite Etling’s performance, Coach Orgeron said Etling is still their guy.

“We’ve got to forget about it,” Orgeron said. “And I think we’ve done that this week.”

Kelley completed 16 of 25 passes for 264 yards. Kelley also had one rushing touchdown and one passing touchdown; a 60-yard touchdown on a screen pass to T.J. Hammonds.

Bielema says his two quarterbacks are great for different reasons.

Orgeron says not knowing who Arkansas’ starting quarterback is will not be a problem.

Coach Bielema says this game is a big one for Arkansas.

Kate Venezio is a fourth-year telecommunication-news student at the University of Florida. Kate does it all: Behind the camera she captures emotional moments as a photographer for the University of Florida Athletic Association. She's comfortable being in front of the camera, too. Kate interviews players, coaches, fans and family members for pre- and post-game coverage as a beat reporter for ESPN Gainesville/WRUF-FM. In addition, Kate produces the sports segment for the weekly WUFT News program. There, she's responsible for writing the script in its entirety to include production commands. The presentation includes video highlights and interviews taped and edited, and Kate then live anchors the final package on a daily deadline. In addition, she writes stories for wruf.com where she informs sports fans of local, state, and national trending topics. Kate also utilizes social media as a tool to help get the stories in front of viewers.
@@kate_venezio
Previous NFL Preview: Jaguars Host Chargers
Next Gator Basketball Team Ready to Embrace High Expectations