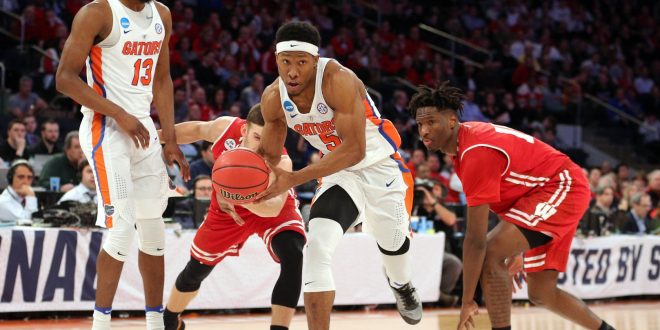 The Gators are ranked No. 8 in the Preseason AP Top 25. One thing is certain: the Gators have championship aspirations.

At Thursday’s press conference, head coach Mike White had a lot to say about his team and the direction of the program. He started off by crediting the seniors last year for setting the tone and getting the team to buy into one common goal.

One of the main leaders on this year’s team is point guard Chris Chiozza. The senior is currently injured with a sprained shoulder. White provided an update on his status heading into the season opener against Gardner-Webb.

Junior combo guard KeVaughn Allen was a big topic of conversation during this press conference, and rightfully so. The Little Rock, Arkansas product has now received four preseason honors. Allen is featured on several preseason watch lists, including the Citizen Naismith Trophy, the Jerry West Award, and the Oscar Robertson Award. Among these, Allen is also an SEC Preseason First Team Selection.

Mike White offered a lot praise about his leading scorer and potential All-American.

The Gators have significantly improved their recruiting each year since Mike White’s arrival. Five-star recruit Andrew Nembhard and four-star recruit Noah Locke (both per 247sports) each recently signed their National Letter of Intent. White is extremely excited about both prospects. He talked about what they can bring to the program, both individually and collectively.

This is only the start of Florida’s recruiting efforts. The Gators are in play for five-star recruit Anfernee Simmons, who recently decommitted from Louisville after the Rick Pitino scandal. Mike White has continued to prove his worth to the program.

While the Gators have national championship aspirations, it’s going to be a daunting task. Chris Chiozza and KeVaughn Allen must stay healthy in order to keep this team afloat. ESPN analyst Edward Aschoff predicted that Florida will win the national championship this year. Three ESPN analysts, including Aschoff, predicted that Mike White will be coach of the year. While all of these predictions are a long shot, it’s safe to say that the Gators are in great shape heading into the season.