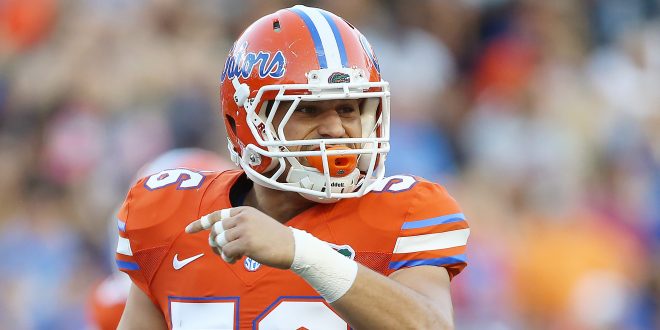 Gators’ Linebacker Cristian Garcia Making the Most of Games

As the Florida football season is nearing the end, the senior class looks to move on after a disappointing season. However, senior linebacker Cristian Garcia, sees his final games as a Gator differently. To Garcia, it’s a chance to give back to the school, the staff and the fans that supported the team.

Unlike many of his teammates, Cristian Garcia wasn’t recruited to come to UF. Nor was he offered a scholarship to attend and play for the football team. Garcia’s path to the Florida football team was unlikely.

Garcia played varsity football at Belen Jesuit Preparatory in Miami. Following high school, he spent a semester at Malone University in Ohio. Feeling to far from home, he then transferred to Florida Tech. However, Garcia wanted more. He moved to Gainesville to attend Santa Fe with one goal: transfer to UF and play for the Gators.

In 2015, Cristian Garcia was officially a UF linebacker. He joined the team as a walk-on week 3 of the 2015 season. He made his debut in the 2016 Citrus Bowl versus Michigan, making two tackles.

Garcia gained widespread recognition the summer of 2016. He was working as a bouncer at a local Gainesville bar, 101 Cantina, when he witnessed a man take a woman behind the dumpster and sexually assault her (as reported by the Gainesville Police Department). When word got out, he became a local hero. Vice President Joe Biden invited him to his house and he even appeared on Good Morning America.

Despite how this season turned out, Garcia believes that the graduating seniors won’t be remembered simply for just one year. Rather, the past two years and their back-to-back SEC Championship appearances will stick with them more.

Currently, Garcia is nursing a minor shoulder injury. However, Garcia still expects to play for the Gators. Garcia’s mentality is simple, he says “you just take the punch and keep moving.” Despite the shoulder pain, Garcia will be ready to help the Gators finish out the season with a possible high note.

As you can see, to Cristian Garcia it means a lot to be a Gator. Former head coach Jim McElwain honored him with a full scholarship to complete his Master’s in Sport Management at the beginning of this year.

The redshirt senior linebacker is playing his last games looking to give back to the UF community. He believes that because the school has given so much to him and the rest of the seniors on the team, it’s on them to finish out a disappointing season with some wins.

Cristian Garcia and the Florida Gators Football team take on the University of Alabama-Birmingham Blazers this Sunday at 4 p.m.