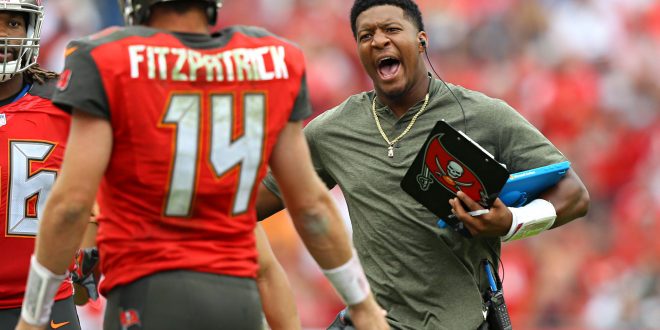 Quarterback Troubles in the NFL

We are halfway through the NFL season and many teams are feeling the effects.

Tampa Bay has had a slew of quarterback issues this season.

The Buccaneers starting QB Jameis Winston will miss at least one more week giving time for the sprained AC joint in his throwing arm to heal.

In the meantime, back up QB Ryan Fitzpatrick snapped a five-game loosing streak leading the Bucs to a 15-10 win over the New York Jets Sunday. Fitzpatrick threw for 187 yards, a touchdown and an interception.

The Bucks are four games behind in the NFC South and remain 0-2 in the devision. Regardless, head coach Dirk Koetter says Fitzpatrick will start against the Miami Dolphins this week.

Also facing starting quarterback troubles are the Minnesota Vikings. Head coach Mike Zimmer faced a tough decision this week when choosing who to go with at starting QB.

Zimmer had to decide whether Case Keenum who has won five games in a row and is third in the league in QBR or  Teddy Bridgewater  will get his first start sine August 2016.

Bridgwater suffered a devastating knee injuries in Aug. 30 2016 where he dislocated knee and tor multiple ligaments and says he is blessed for a second chance.

Zimmer will announce his decision tomorrow.

The 49ers are possibly facing some QB shakeup. San Fransisco head coach Kyle Shanahan has to decide if he is going to play Jimmy Garoppolo or C.J. Beathard after this weeks Bye.

Beathard won for the first time in four starts, taking down the New York Giants 31-21. He completed 19-of-25 passes for 288 yards with two touchdown passes, as well as a rushing touchdown in which he aggravated his thumb injury.

While Jimmy Garoppolo has only had a short time to recognize himself with the 49ers playbook since his trade from New England two weeks ago.

The Niners will have to make this decision before its matchup with Seattle Seahawks on Nov. 26.