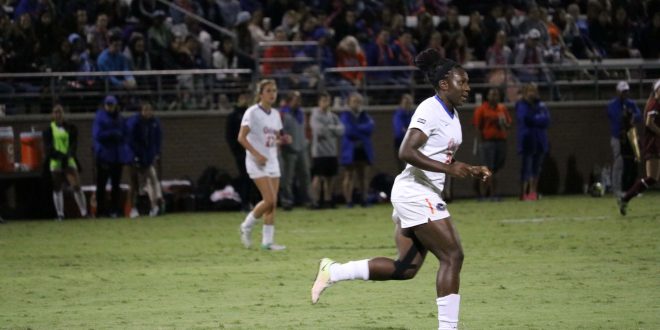 The Florida Gator soccer team advances to the Elite Eight of the NCAA Tournament with a 1-0 double overtime win at home Sunday against the Washington Cougars in their first-ever meeting.  Florida advances to make the sixth appearance in program history in the Elite Eight.

Both teams faced a short turnaround between the second and third round games. In other words, those two days between the physical win for Florida versus USF plus an overtime win for WSU against Tennessee meant both teams had to be ready to play again on Sunday.  The Gators began the game with three defenders in their formation, stacking the midfield against the Cougars. Florida head coach Becky Burleigh had to adjust to a back four because her squad struggled in the first 30 minutes. Gator senior forward Gabby Seiler made the initial decision to change the formation so the team could get into their “comfort zone” playing in a 4-2-3-1.

Gators forward Deanne Rose found herself pushing forward many times without any support from her teammates, resulting in one shot and none on goal in the first half. Washington State produced six shots in the first half, with Elyse Bennett’s shot going just wide. Florida also had trouble clearing the ball, with a few shots needing to be blocked just in front of Kaylan Marchese’s goal.

Florida came out of the locker room with a burst of energy that was absent in the first 45 minutes. Multiple corner kicks, Rose circling around a little deeper in the midfield, and a shot by midfielder Tess Sapone gave life to a previously tired Gator team. The home team began to pile on chances with a freekick near the edge of the box and another corner that resulted in a header that went wide. Cross after cross. Shot after shot. A perfect one-two with Rose and Gabby Seiler resulted in a near-perfect shot that rocked the crossbar. Florida was knocking on the doorstep but was still yet to get an answer. Much like the last match, bookings did not come out until late in the match with three yellow cards (two for UF, one for WSU).

In the closest chance of the day, Florida’s Rose cuts into her right foot and puts the finesse shot just over the crossbar in the 96th minute. Beforehand, Cougars forward Morgan Weaver added two shots to her resume which put her at five shots for the game. In the final seconds in the first overtime, Rose drills a cross to Gabby Seiler, but she is unable to get the shot on target.

In the second overtime, no one other than Rose could slot home the winner. Rose gets goal number nine of the season from six yards out with an assist from Lais Araujo and Seiler. Florida head coach Becky Burleigh shared her thoughts on how the match played out.

Seiler says the ‘Rise Up’ mentality defines the team and the win today was for Burleigh after the passing of her parents this past year.

Florida will travel to play SEC rival and top seed on their side of the bracket South Carolina. The Gamecocks defeated Santa Clara in their third round match up. South Carolina finished the regular season as number one in the SEC but was upset in the SEC tournament by Arkansas. The Gators lost their regular season match up against the Gamecocks 1-0. Burleigh described the opportunity to avenge their loss as “perfect” for a chance to make it to the College Cup in Orlando, Florida. Florida will play either on Friday or Saturday.

We got a Gator going pro. Gators baseball outfielder Austin Langworthy signed with the Detroit …