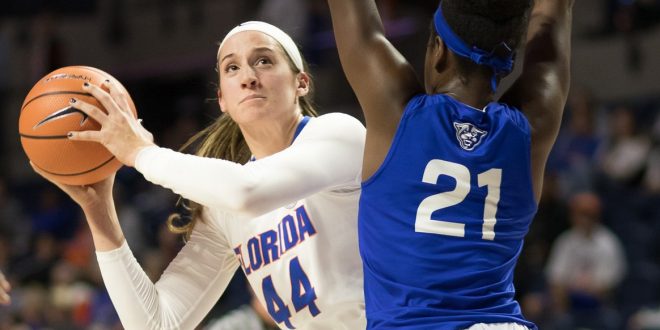 Dominance on the Boards

Hayley Lorenzen made her presence known in the Gators victory over Jacksonville as well. Not only did she lead the team in rebounds, she was also the team’s leading scorer. Lorenzen tied a career high with 20 points on 9 of 15 shooting. The strong performance was aided by getting high quality looks at the basket all game long. Lorenzen says the guards really help with getting the ball inside so she and the other forwards can be in good positions to score. Lorenzen wasn’t the only Gator with a strong individual performance Tuesday night. Sophomore guard Delicia Washington continued her strong play of late. Washington finished Tuesday’s game with 12 points, nine rebounds, and seven assists. Gator head coach Cam Newbauer recognizes the growth Washington has done since the start of the season.

The Gators have made it known that they want to “chuck it from the cheap seats.” The team came into Tuesday’s game tied for fifth in the country in three point attempts per game. However, it was the Gators attacking inside the paint that proved most successful. The Gators finished the game with 36 points in the paint. The Dolphins came into Gainesville with a strong perimeter defense that has allowed an average of 28.1% from three. Coach Newbauer says the team took what the defense gave them and found alternative ways to score.

The Gators have come a long way since their season opening win over Georgia State. Some early season concerns have either gone away or showed signs of improvement Tuesday night. The Gators’ struggle with the full court press was a cause for concern, especially with the thought that opponents will resort to that to slow the team down. The Dolphins got desperate and tried the full-court press to no success. Senior guard Dyandria Anderson says that the team has learned to match the aggressiveness that the defenses give them on those presses. An area that showed improvement on Tuesday was the Gators’ energy out of the gate. The Gators jumped out to an early 7-0 lead and only allowed 10 points to Jacksonville for the first quarter. The Gators have proven that they are correcting mistakes as the season progresses.

The Gators will hit the road once again as they head to Norman, Oklahoma to face the Sooners as part of the SEC/Big 12 Challenge on Sunday.