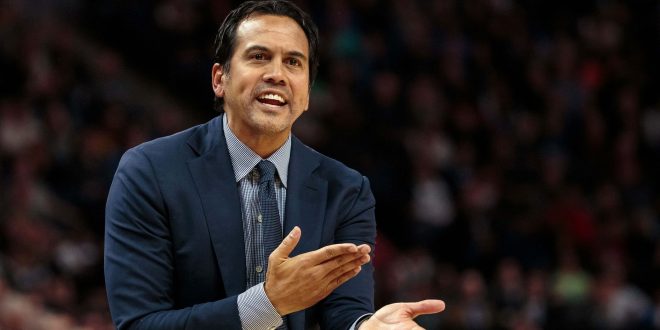 Following victories over Minnesota and Chicago, the Miami Heat (10-10) would drop their first game of their four-game road trip across the northern part of the country. Former Miami stars Dwyane Wade and LeBron James would outlast their old team as the Cleveland Cavaliers defeated the Heat 108-97.

Guard Dion Waiters would lead the way for Miami with 21 points and seven assists. Meanwhile, rookie center Bam Adebayo would notch his best performance of the year. The first-round draft pick would finish the night with a career-high 19 points on 7-7 shooting and six rebounds, including a few monster dunks in the paint.

On the other side, forward Kevin Love would lead the way for Cleveland. The four-time all-star would post a near double-double with 38 points and nine rebounds. Meanwhile, forward LeBron James and guard Dwyane Wade would combine for 38 points against their former team.

In his 15th year in the league, LeBron James has accumulated three championships, 13 All-Star Game appearances and four Most Valuable Player awards. Yet, with just under two minutes remaining in the third quarter, James would receive an ejection for the first time in his professional career.

LeBron just got ejected for the first time in his NBA career. pic.twitter.com/M4vvDbeSNp

According to ESPN Stats and Info, James had played 1,081 regular-season games before the ejection last night. James says he was fouled and showed his frustration to the referee.

The Heat will finish their road trip tonight with a matchup against the New York Knicks in Madison Square Garden. Tipoff is set for 7:30 p.m.

Matthew is currently a senior, majoring in telecommunications with a minor in business administration.
@matt_levay
Previous Gator Women’s Basketball Dominates Offensive Glass in 69-59 Win Over Jacksonville
Next Tiger Woods Returning to Golf at Hero World Challenge