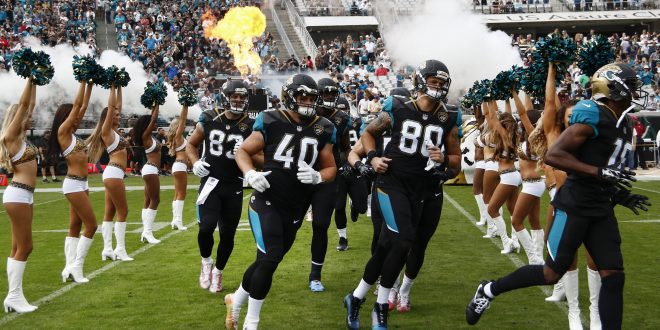 Here’s a quick recap of the the Jacksonville Jaguars game by WUFT Sports reporter Bree Maxwell.

The victory was led by the quarterback play of Blake Bortles, who completed 26 of 35 passes for 309 yards and two touchdowns.

The win comes with some history for the Jaguars. After completing sack number 12.5 this season in the first quarter of the game, Jaguars defensive end Calais Campbell now holds the franchise record for the most sacks in a single season.

Walking off the field with the franchise single-season sack record.

The lead for Jacksonville started early in the first. When the Jaguars faced fourth-and-seven, punter Brad Nortman helped execute a beautiful fake punt, throwing to tight end James O’Shaughnessy for a 29-yard gain to get a first down.  That fake would lead to Jacksonville’s first touchdown of the game as Bortles would connect with Marqise Lee for the score.

The Jaguars would add on to the lead in the second quarter with a Josh Lambo field goal, before the Colts would get on the board with a field goal of their own. Bortles then threw his second touchdown on the day to Keelan Cole, before failing on the two-point conversion. After leading 16-3 in the first half, running back Leonard Fournette would boost their playoff hopes by getting his first score in six weeks with a five-yard run to the end zone.

After the victory, Jaguars head coach Doug Marrone shared the key to the victory, citing the focus they had on the Colts all week.

The victory now puts Jacksonville in a tie with the Tennessee Titans for first in the AFC South race. Bortles also talked after the game about how the wide receivers were “awesome” and “thought they did a good job.”

With playoffs rapidly approaching, the Jaguars are using the last month of the season to develop their team identity. For Bortles, he describes it as being able to play good defense and run the ball. Bortles and the Jaguars look to continue that identity with their next game.

The Jaguars look to keep their momentum going with another home showdown next Sunday as they host the Seattle Seahawks in a battle of playoff implications.