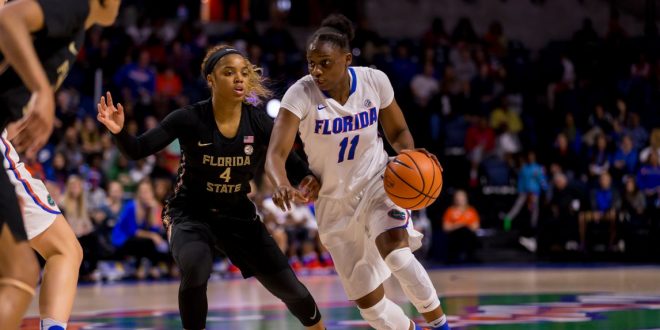 Sunday afternoon was a day that Florida women’s basketball fans might be talking about come March. The Gators were able to secure their first signature win of the season by going into Norman and beating the Oklahoma Sooners 80-61 in convincing fashion. Sunday’s win was the Gators third win in a row and this team seems to be putting everything together.

Senior guard Dyandira Anderson was on fire from start to finish. Anderson led the team in scoring with a career high 29 points. Most of those points came from beyond the arc as she finished 6 of 7 from long distance.  She wasn’ t the only Gator starter to have a strong performance. The five Gator starters combined to score all of the team’s 80 points. Junior guard Funda Nakkasoglu added 24 points on 7 of 15 from the field; however, she left the game in the third quarter after appearing to aggravate her ankle injury on a hard fall after being blocked on a drive to the basket. She did return shortly afterward. After almost registering a triple double in the Jacksonville game, sophomore guard Delicia Washington registered a double-double with 11 points and 15 rebounds, which led the team.

On paper, the Gators didn’t appear to be in full control of the game. The Gators gave up 21 turnovers to Oklahoma with Oklahoma turning the ball over only seven times. However, the difference was that the Sooners failed to capitalize on Florida’s mistakes. That’s because of the hustle and intensity that the Gators brought on the defensive side. Oklahoma went 27 for 78 (34.6%) from the field and a mere 15% from the three point line. The Sooners failed to get to the foul line during the first half. The Gators also dominated in the rebounding category like they have during their recent win streak. Florida was able to pull down 56 rebounds with Oklahoma only registering 31. The Gators were also hitting from beyond the arc, finishing the game with a three point percentage of 46.2% (12-26).

Much was said by Gator head coach Cam Newbauer and the players about the talent Oklahoma had but the Gators were focused on slowing down Oklahoma senior guard Gabbi Ortiz and senior center Vionise Pierre-Louis. Slow down wouldn’t be the correct term to describe what the Gators did to these two on the defensive side. The Gators shut down both Ortiz and Pierre-Louis. Ortiz finished with zero points and Pierre-Louis had just four points on 1 of 8 shooting. These two weren’t the only Sooners who struggled. The entire starting lineup for the Sooners combined to shoot 5 of 30 (16.7%) for the game, tallying only 11 points total. The Sooners tried to make up for lost time in the fourth, pulling within single digits but the Gators destroyed all hope of a Sooner comeback by outscoring Oklahoma 33-21 in the fourth quarter, something the Gators failed to do in the Jacksonville game.

With the win, the Gators now move to 5-3 on the season. They are currently riding a three game winning streak that will be put to the test Wednesday night. The Gators host eighth ranked Ohio State Wednesday evening at 5:30 p.m.