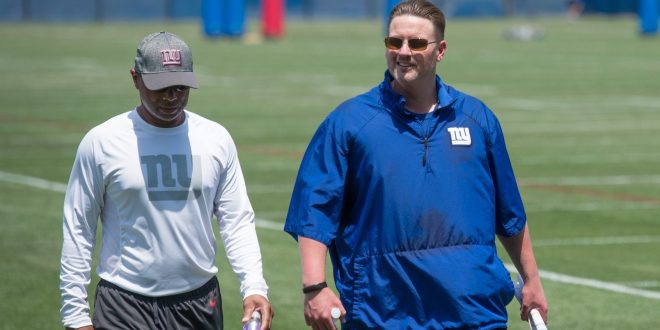 #NYGiants President & CEO John Mara: I met this morning with Jerry Reese and Ben McAdoo, and they've been relieved of their duties.

The firings come after a 2-10 record so far on the season, including a 24-17 loss at the Oakland Raiders on Sunday.

The Lead Up & Reactions

Many factors play into the decision by management. From the 2-10 record, to the benching of Eli Manning after Thanksgiving, it was all coming to a head. Fans called upon management to make it happen, but the benching is the straw that broke the camel’s back.

For the first time in 210 games, Manning would not start for the team. Ownership did not like how the whole situation was handled, and the wheels started turning from there.

Sources: Some members of the #Giants ownership did not agree with how Eli Manning was handled this week and there was intense and serious internal debate. They are trying to figure out the fallout, leading to John Mara not guaranteeing Ben McAdoo would finish the season.

For Reese, the clock started ticking when the offensive line started to crumble. Believing that they were developing, he let free agents flock to other teams. Despite making big moves, such as bringing Brandon Marshall into the offensive fold, it wasn’t enough to save his job.

Monday morning would see the news of the firings. At 11:31, Ian Rapoport of the NFL Network would send out this tweet:

Shortly after, the airwaves were flooding the news of McAdoo and Reese getting fired. Once the story broke, the reactions were coming in waves from teammates and sports personalities alike. Some felt it was a bad move, but others, including Stephen A. Smith, felt it was the right one.

It was time for Ben McAdoo to go. pic.twitter.com/gZky8SBD2X

Giants’ president and C.E.O. John Mara would speak on Monday, praising McAdoo and Reese for their professionalism throughout their time. While he credits them for it, he believes that the time is now for the move to happen ahead of Sunday’s divisional game.

Eli Manning would harp in on the situation, saying that “it’s not what I wanted” and having “nothing but great respect for McAdoo, and same with Reese.”

After the firings, Mara revealed that he had met with defensive coordinator Steve Spagnuolo about taking the vacancy.

Who and What are Next for the Giants?

Spagnuolo is no stranger to the Giants. Playing a big role in their 2007 Super Bowl Championship run, he would remain the defensive coordinator until 2009, where he took a head coaching job for the Rams. He returned to New York in 2015, where the defense was considered one of the worst in the league. He would then lead a turnaround in 2016, bringing the Giants to second in points allowed and an 11-5 record. The defense currently ranks last in yards allowed this season.

#Giants will have Steve Spagnuolo take over as head coach and Kevin Abrams as GM the rest of the way, per person w/ knowledge of team's moves.

With games against the Dallas Cowboys, Philadelphia Eagles, Arizona Cardinals and Washington Redskins looming, Spagnuolo will use the last four weeks as an audition. Spagnuolo was a name considered in 2016 for the coaching vacancy, and is hoping that he will perform well enough to remove the “interim” tag in 2018.

Kevin Abrams is now the interim general manager for the Giants, replacing Reese for the rest of the season. In his 16th season with New York, he previously served as the assistant general manager, as well as the primary negotiator for contracts and is responsible for the team’s salary cap, among other roles.

The New York Giants are now looking at Spagnuolo to take charge. In his head coaching debut, they host the Cowboys. New York is looking to rebound after a 19-3 loss in week one. The NFC East divisional clash kicks off at 1 p.m. from MetLife Stadium in East Rutherford, New Jersey.