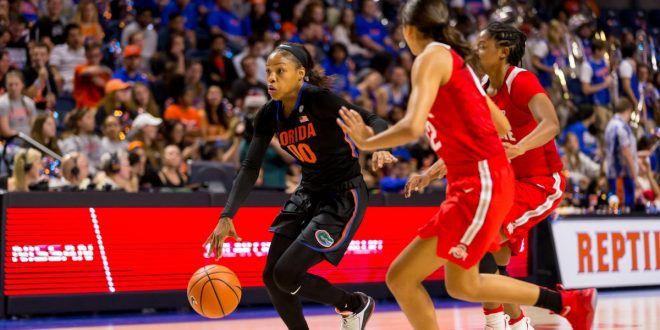 Wednesday’s loss to No. 12 Ohio State was deflating for the Florida Gator women’s basketball team. The Gators committed costly mental turnovers. No matter what the Gator defense did, the Buckeyes still shot the ball extremely well. Even when the Gators pulled within six, they couldn’t maintain the momentum. The loss provides the team a chance to correct some aspects before SEC play commences in a few weeks. They’ll have the opportunity to do so Sunday afternoon as they host the Marshall Thundering Herd.

A twenty-six point dismantling can hurt a team’s confidence. The Gators view that loss like they have approached previous losses this year, as an opportunity to correct their mistakes. Coming out of the Ohio State game, Gators head coach Cam Newbauer says the focus is on fixing the small details. The Gators got away from what they wanted to do in the Ohio State game. The players were playing individualistic basketball and it showed in the loss. When this team is sharing the basketball, they have proven dangerous for opponents. Sophomore guard Delicia Washington says the details will help the team stick with the game plan. The sentiment of sticking with the game plan and having an attention to details has become contagious throughout the team. Graduate forward Paulina Hersler knows that the team must play as a unit to be successful.

In the last two games, the Gators turned the ball over 45 times. In the Oklahoma game, these turnovers were masked because the team was able to pull down rebounds and get back on defense. Against the Buckeyes, the turnovers put the Gators behind the eight ball. Ohio State converted 24 Gator turnovers into 50 points.Washington says that the team needs to focus on the little things when cleaning up the turnovers. Most of the Gator turnovers on Wednesday were mental miscues. Travelling calls, double dribbling, and poor passes were just some of the causes of the Gators turned the ball over. To correct the turnover bug that the Gators have been dealing with recently, Coach Cam Newbauer says it comes down to decision making.

The Marshall Thundering Herd come into Gainesville with a 3-5 record, winning their last game against Morgan State 73-68 on Wednesday. Led by first-year head coach Tony Kemper, Marshall is a scrappy team that could throw the Gators off their rhythm. Hersler thinks that the Gators can best combat this by outsmarting their opponent. The Thundering Herd are an efficient offense, averaging over 40% from the field in all but one game this season.Marshall is led by their redshirt senior forward Talequia Hamilton. Hamilton leads the team in both points (12.1) and rebounds (7.5).  Coach Newbauer knows that the Thundering Herd will be ready for the big stage of playing the Gators in Gainesville.

The Gators look to get back in the win column on Sunday as they welcome the Thundering Herd to Gainesville. Tip-off from the O’Connell Center is set for 1 p.m. on Sunday.

Previous No. 5 Gators Continue to Succeed Away From Home
Next HS Football: Venice defeats Bartram Trail 37-24 to win 7A championship