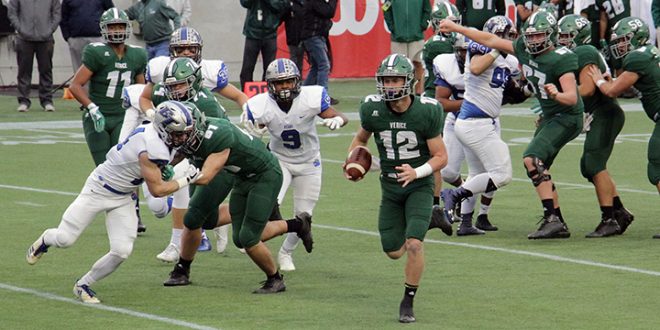 On October 6, the Venice Indians got blasted IMG Academy 38-12. That moment would prove to be a turning point as the Indians would go on to win their next 10 games, the final one ending in a state championship.

Powered by QB Bryce Carpenter, Indians step on the gas

Venice came into this game ranked higher than the Bartram Trail Bears both nationally and in the state. From the start of the game, it showed. Carpenter, who had 60 total touchdowns (42 passing, 18 rushing) before the game, ran 17 yards for the first touchdown of the game. The PAT was good, making it 7-0 Venice to start the game. Bartram Trail later got a field goal from Ethan Dudley, making it 7-3 Venice.

In the second quarter, Venice answered with its own field goal from Zack Sessa to make it 10-3. Carpenter later got his second rushing touchdown of the game, this one for two yards. The PAT was good, and the Indians increased their lead to 17-3. They added to their lead again when Sessa kicked another field goal to make it 20-3 to end the first half.

Venice completely controlled the game in the first half, and a huge credit goes to its offensive line, which made key blocks and opened up big holes for Carpenter to run through.

Bears put on valiant effort in the fourth

In the fourth quarter, Bartram Trail flexed its muscles and showed signs of life. After Sessa kicked his third field goal to put the Indians up 37-10, the Bears scored 14 straight points. Their run got started when quarterback Riley Smith, the other quarterback that Batram Trail utilizes, threw a 54-yard touchdown pass to receiver Griffin Helm. The PAT was good, and the Bears trailed 37-17.

Well worth the wait! Thank you Venice and the entire 941 for your support!! #ItsGreatToBeAnIndian #RollTribe https://t.co/BsQWAjWBi6

Some thoughts on the game

This was Bartram Trail’s first state championship appearance in program history. The Bears deserve a lot of credit for putting up a fight when they could have easily given up after being down big for the most of the game. In the end, Venice’s desire to end its long state title drought was enough to put them on top. Both teams deserve a ton of credit for fantastic seasons.