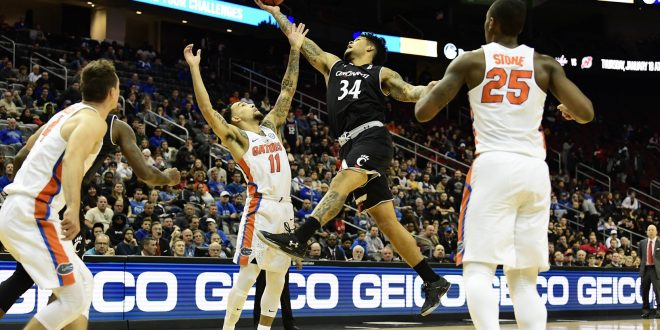 No. 5 Gators Continue to Succeed Away From Home

The Florida Gators outlasted the Cincinnati Bearcats by a score of 66-60 in the Never Forget Tribute Classic. Egor Koulechov led all scorers with 21 points and 7 rebounds, while Jalen Hudson added 17 points of his own. Point guard Chris Chiozza did it all, putting up 15 points, 6 assists, and 4 rebounds. Cane Broome led the Bearcats with 15 points off the bench, while Gary Clark added 9 points and 13 boards (8 offensive). The tilt was part of 2-game series hosted by the Prudential Center benefitting the Families of Freedom Scholarship Fund, which financially supports the education of children impacted by 9/11.

The Bearcats jumped out to a 8-2 lead, but the Gators quickly responded with a 20-6 run. Florida could have blown the game open early when Cincinnati scored two points over a seven-minute span. However, during this stretch, the Bearcats were able to play quality defense and keep the Gators within striking distance. Mike White’s squad took a 34-28 lead into halftime, but that lead quickly evaporated. The contest went back and forth throughout the entire second half. The Gators were able to capitalize on plays late in the game, which led to their eventual victory.

As clutch as @Chiozza11 was down the stretch, give a big shoutout to @JalenHudson5, who had a blocked shot, offensive rebound and steal in the final minute. All intangible plays. #Gators

Florida was getting dominated on the glass the entire game, but came up with crucial boards in the final few minutes of the contest. The Gators also found their shooting stroke that led to so much success at the beginning of the season. They knocked down 6-15 (40%) attempts from beyond the arc. The Bearcats struggled taking care of the ball, turning it over 13 times in the first half and 21 total times overall. Cincinnati had a 59-58 lead with 2:10 left in regulation, but Chris Chiozza scored the final six points for the Gators to secure the win.

Home court is one of the biggest advantages in all of sports. Fans can have a monumental impact on the outcome of a game. The Florida Gators have gained a plethora of experience playing away from home over the past two years. They have played an unprecedented 18 games in neutral locations since the start of last season because of tournaments as well as the renovation of their arena. This experience playing away from home may have been a factor in their NCAA Tournament run last season, when they lost to SEC rival South Carolina in the Elite Eight.

The Gators have had much success in these neutral court games. They are 13-5 and have outscored their opponents by 172 points (9.6 points per game). Three of the five losses came against ranked opponents (Duke twice and Gonzaga), while the other two defeats came against quality SEC teams in South Carolina and Vanderbilt. They do have some high quality wins on neutral courts, including Cincinnati, Gonzaga, Virginia, Wisconsin, Seton Hall, Miami and Stanford.

In the 18 games on neutral courts over the past two seasons, KeVaughn Allen has averaged 13.9 points per game, including a 35-point outburst against Wisconsin in the Sweet 16. Newcomer Jalen Hudson has also been dominant in neutral court contests this season, averaging 23.3 points per game. The Gators have been absolutely lethal from beyond the arc, completing a devastating 49.5% (46-93) of attempts from long-range.

The Gators will have another neutral court game on December 16th as they take on the Clemson Tigers in the Metro PCS Orange Bowl Classic in Sunrise, Florida. Their experience playing quality competition away from home will certainly give them an advantage in March.