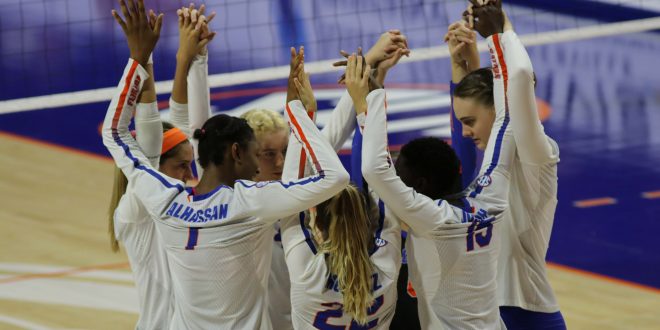 Gator Volleyball will Play for the National Championship

The No. 2 seed Gator volleyball team defeated the No. 3 seed and seven-time national champion Stanford Cardinal in 5 sets Thursday night to advance to the National Championship game. The Gators will play the No. 5 Nebraska Cornhuskers Saturday for the right to hoist the trophy.

Well that was fun! See everyone Saturday FOR THE TITLE! #ChompKC pic.twitter.com/MokLpHrtZ0

How They Did It

Florida won the opening two sets 25-22 and 25-21 over the Cardinal and it looked as if the Gators were going to roll to a quick win. Stanford though responded to grab the third set, 25-18, and then took the fourth set, 25-18. In the fifth and decisive set, four-time All-American Rhamat Alhassan took over early. Alhassan was responsible for four of Florida’s first nine points in the fifth set. She helped Florida take an 11-6 lead in the final set, and Rachel Kramer, who had five blocks, recorded the final kill.

We will have a new national champ in 2017! #NCAAVB pic.twitter.com/ZW9YxAU6pR

A Rematch for a Title

The Gators (30-1 ) will matchup against the Nebraska Cornhuskers (31-4) for the title. The two teams met early in the season in Gainesville where the Gators captured a 3-2 win as a part of the VERT Challenge. In that game, Snyder notched a career-high 27 digs. After that win, the Gators have now defeated Nebraska for the third time in 11 matches, and for the third time in nine matches under Mary Wise.

First serve between Florida and fifth-seeded Nebraska is 9 p.m. ESPN2 will provide television coverage. Tom Collett and Josh Crow will have the radio call for ESPN Gainesville 98.1 FM / 850 AM WRUF.

Why the tone of surprise? pic.twitter.com/3LldJfkYI4