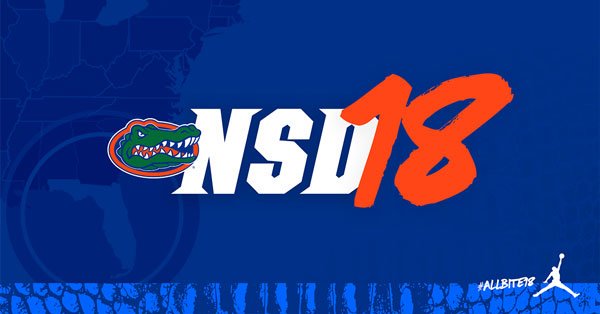 Because of this, the team is already on a strong upward trend from its disastrous 2017 season. But, Gator fans have a few new faces to thank for that. New head coach Dan Mullen held a press conference today to talk about the new signees.  Of these new recruits, eight are expected to be early enrollees.

Between the time McElwain parted ways with Florida and yesterday, the Gators lost 10 commitments. Unfortunately, none of the lost commits signed with Florida today. (Although, some are waiting until February to sign, with Florida still on the table.)

From Mullen’s first week with the Gators, he hit the road, made calls, and scheduled officials with recruits. But, in his own words, he couldn’t have done it without the help of his new (and old!) staff. See what he said, below.

Part of that diligent recruiting got Florida its biggest need- a quarterback. Emory Jones, a consensus four-star prospect, committed to Ohio State his sophomore year, but flipped to the Gators today.

Jones cited Mullen’s proven track record as a successful quarterback developer as his decision to become a Gator. But Mullen had some high praise for Jones as well.

On the Future of the Program

Even with the addition of Jones, there’s no doubt that Gator football is in a rebuilding stage. Freshmen and sophomores started at almost every position last year, and it looks like Florida will be starting young guys again next year.

Coach Mullen says the Gators are constantly looking towards the future. Listen to his more in-depth analysis, below.

Here are the new members of #ALLBITE18

Previous Florida Bounces Back With Win over JMU
Next FEATURE: A Glimpse into the Lives of RecSports Student Employees