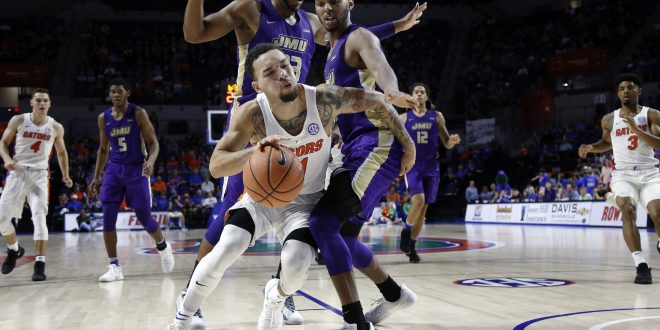 Florida Bounces Back With Win over JMU

The Florida Gators ran away late and defeated the James Madison Dukes 72-63. Chris Chiozza led all scorers with 19 points, 7 assists, and 6 rebounds, while KeVaughn Allen added 17 of his own. Ramone Snowden paced the Dukes with 18 points and 8 rebounds. The Gators two leading scorers on the season, Jalen Hudson, and Egor Koulechov, combined for a measly 14 points and shot 5-19 (26.3%) on the night.

The Dukes started the contest shooting 0-7 from the field with three turnovers. Their first bucket came 5:37 into the game, but the Gators were unable to take advantage of this lackluster start. James Madison tied the game at 19 apiece, and neither team was able to create much separation throughout the duration of the half.

Eight of the 12 JMU baskets came in the paint, as Florida continued to struggle to defend the interior.

Chris Chiozza (11 points) and KeVaughn Allen (7 points) scored 18 of 31 first-half points for Florida. Matt Lewis led the Dukes with a dozen points at the break.

The Gators shot 11-29 (37.9%) overall, including 5-17 from beyond the arc. With both teams struggling to find a rhythm offensively, Florida was fortunate to take a 31-30 lead into the intermission.

JMU turned the ball over five straight times to start the second half, and the Gators were able to extend their lead to 9. The Dukes fought back and were able to keep the contest close throughout a majority of the second half. The Gators were clinging to a four-point lead (53-49) with 9:20 left, but caught fire and went on a 13-3 run. This run extended their lead to 14 with under five minutes left in regulation, which was too much to overcome for the 4-9 Dukes.

JMU got hot beyond the arc in the second half (5-10) but did not continue to dominate the Gators in the interior. They only scored four baskets that weren’t threes and shot an abysmal 9-25 (36%) from the field.

The Gators were only able to muster up six points in the final five minutes, but stellar defense kept the Dukes out of striking distance. This included 1-5 shooting and four JMU turnovers during this stretch.

Turnovers plagued the Dukes throughout the contest. Florida scored 23 points off of 18 JMU turnovers, which was undoubtedly the difference in the game. The Gators also struggled to take care of the ball, but were fortunate to only give up 11 points on 12 turnovers.

While it was not easy, the Gators closed the game strong and won 72-63.

The 7-4 Florida Gators take on the 5-4 Incarnate Word Cardinals on December 22 at 7 p.m. at the O’Connell Center. The Gators look to win two straight games for the first time since they beat Stanford and Gonzaga on back-to-back nights in the PK80.