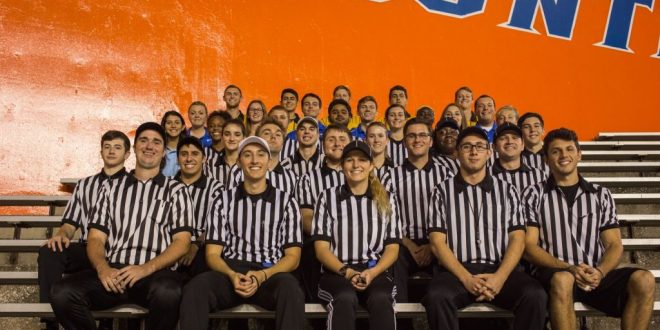 FEATURE: A Glimpse into the Lives of RecSports Student Employees

The Department of Recreational Sports at the University of Florida employs more than 600 student employees to give themselves and other students a fun and safe place to play any sport imaginable.

Keegan Ashbee is the coordinator for competitive sports at RecSports. In an interview from earlier this year, Ashbee said that the student employees are a massive part of the program.

“We give our program assistants, our supervisors, even our officials, a lot of room to grow and make the program theirs, because they are the face of the program.”

These student employees work a plethora of jobs for the department in order to maintain the standard that other students have upheld before them.

Life as an official

When Jacquie Mumford isn’t working on her pre-dental or Portuguese coursework, she is working as a volleyball official. She first found out about the opportunity from her older brother, who worked as a basketball official during his time at the university.

Fall 2017 was her first semester working for the RecSports program, and she intends to continue working there and exploring new sports to officiate.

“I definitely think continuing reffing is something that I’ll do just to gain some more experience and branch out into other sports so I have the tools and the knowledge to become a supervisor.”

Although Jacquie was unable to get a supervisor position for next semester, she plans on reapplying for the position in the future once she’s gained more experience as a referee.

One of the best things about working as an official for RecSports is the flexibility of the scheduling.

Although she had a very small window of availability to work every week, the coordinators made sure that she was assigned to that time slot.

The WhenToWork system gives student employees a tremendous amount of freedom over their work schedules. If a student has a few tough exams and doesn’t feel comfortable working that week, then that student can set unique preferred hours for that specific week and prioritize their schoolwork.

Additionally, if a referee is scheduled to work a shift in which they are unavailable, the trade board makes it fast and easy to either swap shifts with another employee or drop the shift altogether.

Nothing makes a job easier than having friendly coworkers. For Jacquie, she was able to maintain a professional, yet friendly relationship with her supervisors; they were willing to talk about things not pertaining to the sport, as long as the ball wasn’t in play of course!

Good sportsmanship from the players

The majority of her time that she spent in her first semester was positive. One of the things that stood out most to her was some of the good sportsmanship shown by teams.

“A lot of times after games, players would come up and thank me, which I thought was really cool. I always made sure to tell my supervisors, because teams get sportsmanship points.”

However, with all of the good sportsmen come the more aggressive players; something that comes with the territory.

Naturally with competitive sporting events comes the competitive drive of athletes. While RecSports offers recreational leagues for calmer participants looking to have a good time, even some of these games can get heated. Officials are paid to make calls, which often leads to annoyed players on the wrong side of the call. Most times, this is simply due to a misunderstanding of what happened.

Jacquie joked about these kinds of run-ins, saying that she is “paid to get yelled at.”

However, these occurrences haven’t deterred her from wanting to continue up the RecSports employment ladder.

Life as a program assistant

As students work their way up the employment ladder, many things change.

Lane Goodwin is a program assistant for RecSports at UF. He has been a part of RecSports for over two years now, starting out as an official before making his way into a managerial position.

Just like working as an official, the program assistant position comes with its pros and cons.

Lane loves working with such a wide variety of sports on any given night. This keeps the job interesting and requires him to stay alert due to the flexibility of events.

Of course, just like other students, Lane loves to get in on the action! Here is a clip of him attempting his hand at cricket:

Come que grillo? defeats New York Yankees 30-29 in our first ever intramural cricket game. Here is @bravelane getting bowled out by @gian_ballyouup pic.twitter.com/HKt3cdM1sP

More of a difference

While officials make all of the big calls in the games, Lane says that he feels like he makes more of an impact working behind the scenes.

Just as Jacquie mentioned with her experience, Lane says that the RecSports workplace is enjoyable.

“It is a family-like atmosphere; I get to interact, work and develop with awesome students.”

However, with the good comes the bad.

Necessity to be innovative

With all of the responsibilities program assistants have with planning a schedule of diverse sporting events, it can be difficult to keep up. However, in addition to just keeping up, the assistants need to be innovative; they need to constantly bring new ideas to the table to keep the RecSports events fresh.

As expected, hours are much longer for program assistants than officials. With the planning of the events as well as oversight of these events, days can be long. Because most of the events occur in the evening, nights can even be longer.

We are looking for Graduate Assistants to join our team! Applications are open and information can be found on our website under the 'Student employment' tab! pic.twitter.com/oSK4fhvibv

The biggest thing Lane said that he will miss after he graduates are the bonds he has developed.

“I’ll miss the amazing people I’ve gotten to know over the past two years and how close-knit everyone is.”

For more information, visit the student employee page on the RecSports website.