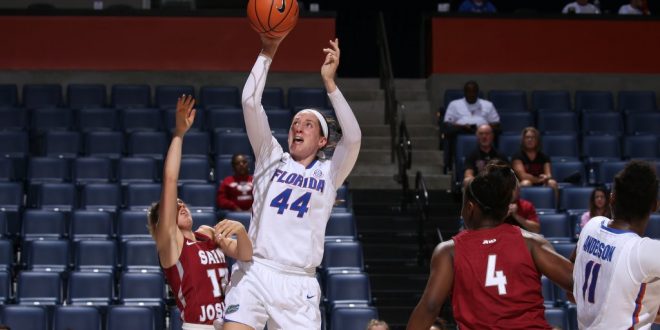 Following one of the most disappointing losses of the season, the Gator women’s basketball team bounced back in a big way. The Gators won convincingly over St. Joseph’s 71-51 Thursday afternoon.

The Gators were dominant in the rebounding department Thursday. The dominance played a key part in the team getting back on track after a disappointing loss just a day prior. Against St. Joe’s, the Gators pulled down 45 rebounds. Even though the Gators pulled down one more board than the loss on Wednesday, the difference was that the Gators converted on offensive rebounds. Florida took fourteen offensive rebounds and turned them into 21 second-chance points. This is the vast difference from the day before when the team only had eight second-chance points.

In the last two games, the Gators have limped to the finish line when holding a good lead. They were able to overcome the poor ending in the win against Marshall. However, the poor play in the third quarter against Chattanooga proved costly. The Gators were outscored in the quarter 25-12 against the Mocs. Florida was in a similar position in the third quarter. The Gators had the lead going into the third and kept it.

The Hawks made a push to make it a five-point game with eight minutes remaining. Head Coach Cam Newbauer’s team wouldn’t let history repeat itself for the second day in a row. The Gators would go on a 15-4 spanning close to five minutes. The run extended Florida’s lead to sixteen and it was all Gators in the rest of the way.

With the Gators attacking the boards in a big way on Thursday, it’s safe to say that the frontcourt tandem of Paulina Herslser and Haley Lorenzen led the charge offensively for the Gators. Hersler led the team in scoring with 19 points on 7-10 shooting, including going 3-5 from beyond the arc. This was the first time this season that Hersler led the team in scoring. Lorenzen finished the game with her sixth double-double of the season, 12 points and 10 rebounds. Lorenzen was named to the Gator Holiday Classic All-Tournament Team.

The starting frontcourt, tasked with an increased role with Sydney Searcy’s absence, stepped up. Sophomore guard Delicia Washington led the trio with 14 points on an almost perfect shooting performance (7-8 from the field). After being close a no-show against Chattanooga, senior guard Dee Anderson added 11 points. Junior guard Funda Nakksoglu totaled 10 points after leaving momentarily at the start of the game with what appeared to be a cramp. The starters are the driving force of this team and it showed Thursday. The starting five had all but five of the Gator points.

With the game clearly won, head coach Cam Newbauer let the newest Gator make her debut in the orange and blue. Freshman walk-on forward Stephanie Brower checked into the game for the final two minutes. Brower joined the team on December 12th.

Previous FEATURE: A Glimpse into the Lives of RecSports Student Employees
Next PREVIEW: Incarnate Word vs. Florida