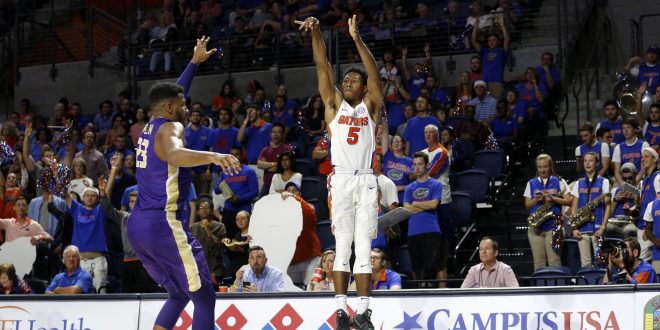 The Florida Gators’ non-conference schedule comes to an end on Friday. UF is set to take on Incarnate Word tonight for the first time in program history at Exactech Arena at the O’Connell Center at 7 p.m. The Gators are coming off a 72-63 victory over James Madison at the ODome on Wednesday night.

Incarnate Word has one win vs. Division I teams this year. The Cardinals beat UMKC by four just prior to their most recent 72-66 loss to UTEP. IW is ranked 237th in offensive efficiency and 288th in defensive efficiency. While there’s not many things the Cardinals do well, they can certainly knock down shots from beyond the arc. Incarnate Word is shooting 40.5% from long-range, good for 24th in the nation, but has struggled to find the same success closer to the basket. The Cardinals rank in the bottom-25 in the NCAA in two-point percentage (42.9%).

Aside from their three-point shooting success, Incarnate Word likes to play fast and in transition. The Cardinals play at the 9th-fastest tempo in all of college basketball, per KenPom, and have found a knack for getting to the line. IW is ranked 35th in the NCAA in free throw rate.

Of all the Cardinals players, Simi Socks is the one to know. Aside from having the best name in the Southland Conference, Socks leads the team with 15.4 points per game. He’s shooting 50.1% from the field and 47.5% from beyond the arc, as well. In his last two games he’s averaging 20.5 points and 6.5 rebounds, while shooting 83.3% from downtown.

How Will Florida Win This Game?

Well, it shouldn’t be hard. The Gators are the far better team in this tilt and possess talent that the Cardinals simply just don’t have. Aside from playing an extremely fast tempo, Incarnate Word turns the ball over a ton. IW has the 8th-worst turnover rate in all of college basketball and that’s exactly where Florida excelled last game. Against James Madison, the Gators scored 23 points off of turnovers, which accounted for 31.9% of their points that night.

Incarnate Word has also shown that they’re quite terrible at defending the perimeter. The Cardinals are allowing opponents to knock down three-pointers at a 39.6% clip, which ranks 318th in the nation. Florida is sinking 39% of their threes on the year, and Gator fans should expect an even higher percentage tonight.

Friday night’s game tips off at 7 p.m. and can be seen on the SEC Network and the WatchESPN app with Mike Morgan and Sean Farnham on the call. You can listen to the game, as always, on the Gator IMG Sports Network with Mick Hubert and Mark Wise on the call. The contest is also being broadcasted nationally on the radio on Sirius 137 and XM 190.