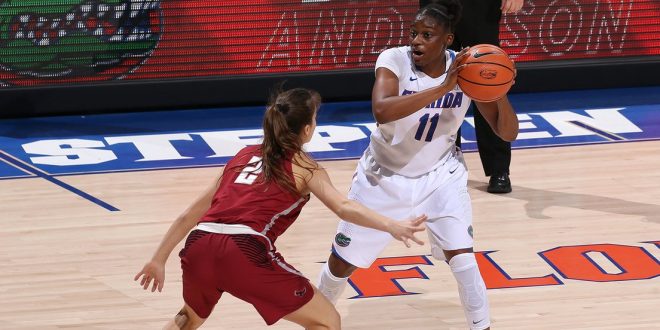 For the Florida Gators, the SEC slate didn’t get off to the best start. The Gators raced to a strong lead in the first quarter against Auburn. Then, they limped to the finish line in the fourth quarter leading to a tough road loss. As the Gators come home for their SEC home opener, they hope to put together a complete performance against SEC foe Alabama.

Cut Down on Mistakes

Even though Florida has made it a priority this season, they have struggled to cut down turnovers. In the last two games, the Gators have turned the ball over a combined 47 times. This is the second time this season where the turnover number for two games combined has exceeded 40. The first time was when Florida beat Oklahoma and lost to Ohio State. What didn’t help the turnover issue against Auburn was the Tigers’ success in disrupting the Gator offense through a full-court press, which is another on and off again issue for the Gators.

Another reason that the turnover department needs attention for the Gators is that teams are converting on them. The Gators have experienced issues in preventing their mistakes from becoming costly. Auburn easily turned the extra possessions from Florida’s turnovers into points. The Tigers finished the game with 33 points on 26 Florida turnovers.

The ten-win Crimson Tide come into Gainesville in a similar spot to the Gators. Alabama dropped its SEC opener to Missouri 62-56 Sunday. The Tide couldn’t do anything offensively in their matchup with Missouri. Alabama finished the game shooting 16-56 (28.6%) from the field and a horrific 4-21 (19%) from three-point land. Before the loss, the Crimson Tide was rolling through their non-conference schedule. Alabama won their final six non-conference games before starting SEC play. Similar to their in-state rival Auburn, Alabama is a poor three point shooting team. The Tide have a three-point shooting percentage of 26.7% for the season. They are led in the scoring department by senior guard Hannah Cook, who’s averaging 11.1 points a game.

The rivalry the Gators have with Alabama is one of the program’s longest-running rivalries. The two schools will meet for the 58th time Thursday evening. This makes the series with Alabama the third longest in Florida Gator women’s basketball history. The Tide currently lead the series 29-28, with Thursday being an opportunity to tie the all-time series record. The chances of that happening are strong when looking at the recent history. Alabama hasn’t won in Gainesville since 2010 and the Gators have won the last seven meetings.

Both the Gators and Crimson Tide look to win their first SEC game of the season when the two meet in Gainesville Thursday night. Tip-off from Exactech Arena is set for 7 p.m.