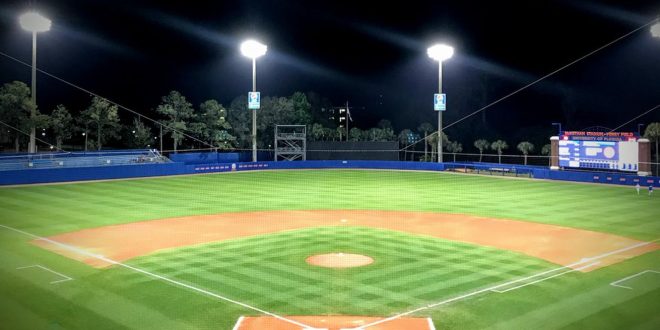 The Gator baseball program may have just recently captured its first national championship in 2017, but the standard of performance at the University of Florida was set high years before current head coach Kevin O’Sullivan arrived in Gainesville. Pat McMahon and Andy Lopez, both former Gator baseball head coaches, are being recognized for their outstanding coaching careers. They were inducted into the American Baseball Coaches Association Hall of Fame this past Friday.

Lopez took over as head coach of the Gators in 1995. During his time at the helm, Florida won 40+ games on four separate occasions, including a 50-18 mark in 1996; his overall record over seven seasons was 278-159-1. Under his leadership, the Gators appeared in five NCAA Tournaments and two College World Series. He also won two SEC championships.  Lopez won a national title while coaching at Arizona and at Pepperdine as well.

Lopez says he’s humbled to receive such an honor and credited his players and staff for his success during his time at Florida.

He now works as an analyst for the Pac-12 Network. Lopez says he misses the game, but is enjoying not having to deal with the traveling and recruiting that comes along with coaching a collegiate team.

Thank you to every coach, player, and friend who touched my life. #HOF18 is because of you. God Bless https://t.co/GYUCphTdO2

McMahon became head coach of the Gators in 2001 immediately following Lopez’s tenure. He led Florida to a runner-up finish in the 2005 College World Series. Under his guidance, the Gators finished with three 40+ win seasons. In total, his teams made four NCAA Regional appearances, two NCAA Super Regional appearances and compiled a 231-143-1 record.

McMahon believes his induction into the ABCA Hall of Fame should be considered be a group award credited to the quality people that supported him.

McMahon now works for the New York Yankees organization and says he loves his job because he is still teaching every day.

I'm an above-average golfer with surprisingly great touch around the greens. Click on my twitter link for some sports talk.
@Ry_McGinn
Previous Gator Women’s Basketball Can’t Complete Comeback in Double Overtime Loss to Ole Miss
Next Saints March Past Panthers in NFC Wild Card Round

Florida’s beloved McKethan stadium is getting a whole new makeover. The new stadium will house …