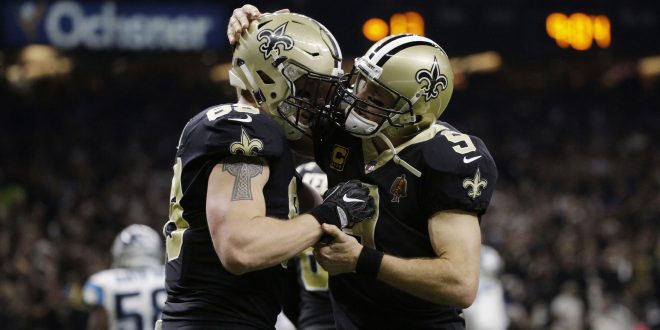 Saints March Past Panthers in NFC Wild Card Round

The New Orleans Saints and Carolina Panthers had already met twice this season, with both NFC South matchups resulting in wins by New Orleans.

With higher stakes a third time around, the Saints completed the season sweep.

New Orleans held off a late comeback attempt by Carolina to earn a thrilling 31-26 victory at home in the Superdome. The win advances the Saints the next week’s divisional round when they’ll travel to Minnesota to take on the Vikings.

The Saints have two running backs (Mark Ingram and Alvin Kamara) that each had over 1,500 all-purpose yards during the regular season, but it was Drew Brees and the passing attack that did most of the damage.

Brees torched the Panthers’ secondary to the tune of 376 yards and two passing touchdowns. Michael Thomas (eight receptions, 131 yards) and Ted Ginn, Jr., (four receptions, 115 yards, TD) each went for over 100 yards as the Saints marched up and down the field against Carolina.

On the opposite sideline, Cam Newton had himself a day as well, throwing for 349 yards and two touchdowns. What hurt him and the Panthers was the fact that for most of the game, Carolina was settling for field goals as the Saints were scoring touchdowns.

The Saints opened the scoring in the first quarter on an 80-yard touchdown connection between Brees and Ginn Jr. after Carolina kicker Graham Gano missed a 25-yard field goal.

YOU'RE NOT GONNA CATCH @TEDGINNJR_19.

Carolina answered that drive with a 27-yard field goal. The Saints tallied two more touchdowns via a Zach Line run and Josh Hill reception while the Panthers added two more field goals to go into the break down 21-9. After the game, Saints head coach Sean Payton talked about how holding the Panthers to field goals instead of touchdowns was key.

The Panthers made it interesting in the fourth quarter, as touchdown passes from Newton to Greg Olsen and Christian McCaffrey made it a one-possession game.

New Orleans’ defense stepped up in the clutch though. Carolina had the ball deep in New Orleans territory with a chance for a game-winning hail mary, but Vonn Bell sacked Newton near half-field on fourth down to punch the Saints’ tickets to Minnesota. Drew Brees said that it was a total team effort that is sending the team to the divisional round.