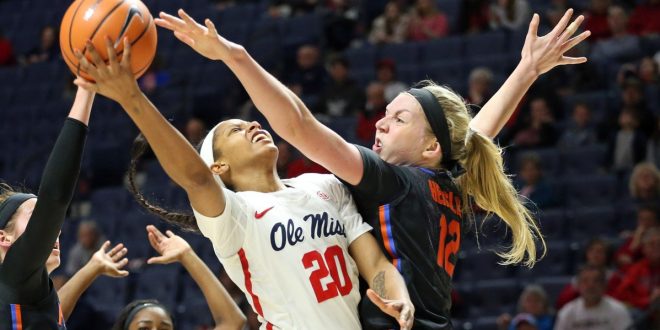 The effort in the game’s final moments against Ole Miss was what Gator women’s hoops fans have yearned for all season. However, the final score wasn’t what the Gator faithful wanted. After trailing by 15 in the third quarter, the Gators rallied to make it close and send the game into double overtime but they couldn’t complete the comeback as they lose 78-75 to Ole Miss.

WATCH: Highlights from today's double-OT thriller. @GatorsWBK is back in action on Thursday (1/11) at 7pm ET inside the @OConnellCTR – https://t.co/eGBsDQ1tNq pic.twitter.com/ukXe5rL48y

Toughness Down the Stretch

Toughness has been an aspect that Florida has been lacking this season. After two disappointing endings to games, the Gators should hold their heads high after fighting to the bitter end against the Rebels. The Gators ended the first half going 0/9 from the field in the final seven minutes. In the third quarter, the Rebels led as much as 15 with 5:37 remaining. The Gators took advantage of a small cold spell for Ole Miss to make it a two-possession game. Then, the Rebel offense ended the quarter on a high note, extending the lead to 10 points.

In the fourth quarter, the Gators would make things very interesting. Florida would go on a 10-2 run to open the fourth quarter. The two teams would trade runs and shots throughout the quarter. With the Rebels holding a four point lead with 47 seconds left on the clock, Gator forward Paulina Hersler hit a key jumper to cut the lead to two with 31 seconds remaining. After Rebel guard Alissa Alston went one of two from the foul line, Hersler tried her luck from the top of the three point arc, but missed. Luckily, guard Dee Anderson was there for the rebound and the put back to tie the game with less than a second remaining. This would send the game into overtime, where the drama only intensified.

In the first overtime, two free throws from forward Haley Lorenzen put the Gators up 63-61, which was Florida’s first lead of the game since 4:44 left in the first quarter. Then, a Dee Anderson three-pointer extended that lead to 66-63. Alston would go down the court and answer with a three of her own to tie it. Two more crucial free throws from Lorenzen put Florida in front 69-68 with 43 seconds remaining. Ole Miss star Madinah Muhammad would air ball a three pointer out of bounds with 20 seconds left. The Gators were able to escape the Rebel attempts at an intentional foul until four seconds were left on the clock. They sent the game’s leading scorer, Florida junior guard Funda Nakkasoglu, to the line. Nakksoglu went one for two from the charity stripe giving the Gators a 70-68 lead. Out of a timeout, Alston drove straight to the basket with no defenders near her to tie the game and give the fans at The Pavilion another five minutes of basketball.

In the second overtime period, the game turned into a defensive standoff. Ole Miss struck first with a Promise Taylor layup. The next points wouldn’t come until 1:47 left in the period when Lorenzen knocked down a jumper to tie the game at 72. Muhammad would give the Rebels the lead with a layup on the following possession. Lorenzen would strike again for the Gators, this time from beyond the arc. She hit a key three pointer to give the Gators a one-point edge with less than a minute remaining. After some back and forth, Muhammad would drive into the lane and would get the foul on Hersler to send Muhammad to the line for two monumental free throws with three seconds left. She sank both from the charity stripe, giving Ole Miss a 76-75 lead. Florida had a chance at the end but couldn’t inbound the ball in time, leading to a five second call and the game being sealed for the Rebels.

Florida started Sunday afternoon’s game with their usual turning the ball over repeatedly. The Gators had nine turnovers in the first quarter alone. Many of the takeaways for Ole Miss were courtesy of errant passes from Gators. After the first quarter, the Gators became more conscientious of maintaining possession. They only committed two turnovers in the second quarter, bringing their total for the half to 11. Ole Miss took advantage of these turnovers by turning them into 14 points. The Gators finished the game with 18 turnovers. Gator head coach Cam Newbauer says the early turnovers hurt the Gators in the long run.

Ole Miss made it a point to prevent Haley Lorenzen from making an impact on Sunday’s game. The Rebels were constantly swarming to the senior forward anytime she touched the ball. They also forced Lorenzen into early foul trouble. She had two turnovers with four and half minutes left in the first quarter. Newbauer kept his star forward in the game but Lorenzen didn’t get on the board until the third quarter. The Gators had their player to single out in Madinah Muhammad with the team keeping her in check most of the way.

Third time wasn’t the charm as the Gators still lack a win in SEC play. The team returns home Thursday night where they’ll take on Kentucky at 7:00 p.m. This will be another game for Florida where both teams are looking to claim their first SEC win of the season.