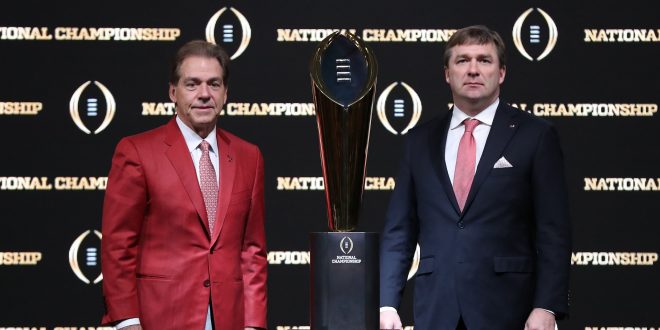 Share
Tonight is the night for college football fans! The NCAA National Championship, between SEC foes Alabama and Georgia, will be meeting in Atlanta for an SEC Showdown at 8PM. This is the SEC’s second time having two teams play in the National Championship (Alabama vs LSU 2012) and they are the only conference to have two teams play in the title game. Head Coach for Alabama, Nick Saban, has experience in the National Championship, he’s Coached the Crimson Tide in the title game six times now and has won it four times. However, Georgia’s Head Coach, Kirby Smart, has experience of his own having been Nick Saban’s Offensive Coordinator from 2008-2015.

The Georgia Bulldogs started the year out hot. The Dawgs went 9-0, which was their best start since 2005, when they went 7-0. Their first lost was handed to them from Auburn 40-17. However, they got redemption in the SEC Championship game when they beat Auburn 28-17.

In the Playoffs, the Dawgs played in a record-setting Rose Bowl against the Oklahoma Sooners. After being down 31-17 at the half the Bulldogs managed to have an incredible comeback and score 28 points in the second half; and eventually win in double overtime 54-48. With a 27-yard rushing Touchdown from Sony Michel. It was the first time the Rose Bowl had ever gone into overtime.

Kirby Smart says, the key coming into the game is to be smart and stay forced on the game ahead.

Alabama, like Georgia, only had one bump in the road when they faced Auburn in the Iron Bowl, in their last game of the regular season, and lost 26-14. Which granted Auburn the SEC West Title. However, regardless of not playing in the SEC Championship game, the College Football Playoff Committee still thought Bama deserved to play for the championship. And with their track record, it makes ssense to most, unless your Ohio St. or the “National Champions” UCF.

In the a Sugar Bowl Bowl, the Tide showed off their defense and held the Clemson Tigers to only 6 points in their 24-6 victory.

Nick Saban might have been in this situation many times, but even he acknowledges that UGA might have the better team of the two.

Saban says, he thinks his old offensive coordinator has done an amazing job in his first two season coaching and that Smart will have the Dawgs in great shape.

For UGA the running back position seems to be the most impressive (for quit a few years). With Nick Chubb and Sony Michel leading the way they will most liking be giving Bama’s defense their toughest competition in the run game this season. The two set a record of the most combined rushing yards of any duo in career hisstory with 8,259. This Season, Chubb has 205 yard receiving, 1320 rushing yards, averaging 6.4 yards a carrying and has 15 touchdowns. Michel has 142 yards receiving, 1129 rushing, averaging 8 yards a carrying and 16 touchdowns this season.

The Dawgs also have a great linebacker in Roquan Smith who has had 76 solo tackles and 5.5 sacks.

The Quarterback for the Dawgs, Jake Fromm, might only be a freshman but he has shown great composure this year. This season he has a 63.7% completion rate with 2383 yards. And for him this Championship is something that has been on his mind for a long time.

For Alabama the quarterback position has a little more experience with Jalen Hurts at the helm. Hurts played in the National Championship last year against Clemson. This season Hurts has a 61.4% completion rate with for 2060 yards.

Like UGA the Tide has some a very nice rushing offense with running back’s Damien Harris, Bo Scarbrough and Josh Jacobs being so explosive.

Defensive Back, Ronnie Harrison has also played great for the Crimson Tide with 41 solo tackles and 3 interception this season.

Will Nick Saban protect the dynasty he has built at Alabama or will an old employee, Kirby Smart look to start his own? The championship title game kicks-off at 8 P.M. (01/08/18), but you can start listening to coverage on ESPN Gainesville 98.1 FM/850 AM at 6:30 P.M.