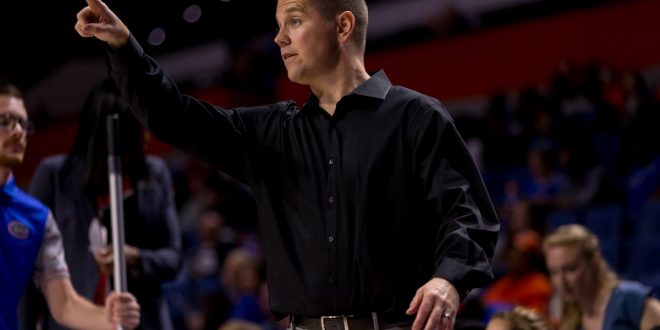 Even though the Gator women’s basketball team came up on the losing end Sunday to Ole Miss, there were a lot of positives in that game that can be building blocks as the team continues SEC play. The Gators were so close to completing a 15 point come from behind win after starting the game sluggish offensively. The strong ending was a major positive from Sunday’s disappointing double overtime loss. The Gators, still chasing that elusive first conference victory of the season, look to use that same intensity and toughness shown late in the Ole Miss game from the onset of their home contest with the Kentucky Wildcats Thursday night.

After limping to the finish line in the first two SEC contests, the Gators came storming back against Ole Miss. Ultimately, the Gators put themselves behind the eight ball in the first quarter, not getting shots to fall and turning the ball over nine times alone in the first quarter. Gators senior forward Haley Lorenzen admits that the team wasn’t ready to play at the start of the Ole Miss game. This has been the trend for the team this year. Earlier in the year, the team had trouble starting the game. Then, it went to not finishing the game game. Now, the pendulum seems to sway to concerns regarding the start of the game.

The team is trying to correct that issue before taking the court on Thursday against Kentucky. Florida junior guard Funda Nakksoglu addresses what specifically the team has to improve in order to come out strong from the jump. The Gators have had a few complete game performances this year. In SEC play, the team has either put together a strong first half or strong second half. Gators head coach Cam Newbauer stresses the need for the team to put together a complete game of basketball.

The Gators announced on Tuesday that they added transfer guard Danielle Rainey to the team. Rainey comes to Gainesville from TCU. She says that the family atmosphere and the direction of the program drew her to Florida. Rainey played in eleven games for the Horned Frogs her freshman year.  She didn’t see the floor in the early months of this season. Due to NCAA transfer rules, Rainey will have to wait until the 2018-19 season to make her Gator debut. However, Rainey still plans on making an impact for the team right away through practice. Even though she isn’t playing this season, Newbauer says Rainey will bring a lot both on and off the court for the Gators this season and in the future.

Another player hoping to make an impact for the Gators is guard Gabby Seiler. Seiler joined the Gator women’s basketball team last Thursday after spending the fall semester with the soccer team. Seiler practiced with the team for the first time Tuesday. Seiler says the transition has been smooth for her so far. Seiler’s role on this team is unknown. She plans on being a positive presence for the team and help out any way she can.

Kentucky comes into Gainesville trying to accomplish the same thing the Gators have tried to do the last three outings: win the first conference game of the season. They fell to 0-3 in conference play when they lost at home to Georgia 56-42. The Kentucky offense was ice cold in the loss, shooting 20.4% from the field. The 8-9 Wildcats have been battle tested early in SEC play, having already played top SEC teams like No. 6 Tennessee and No. 17 Texas A&M. Newbauer knows that Kentucky comes into Gainesville hungry and will be a tough opponent for his team. For the Gators to finally capture that first SEC win of the season Thursday night, Lorenzen says it call comes down to the team’s self-confidence

The Gators look to win their first conference game of the season when they welcome Kentucky to Gainesville Thursday night. Tip-off is set for 7 p.m.