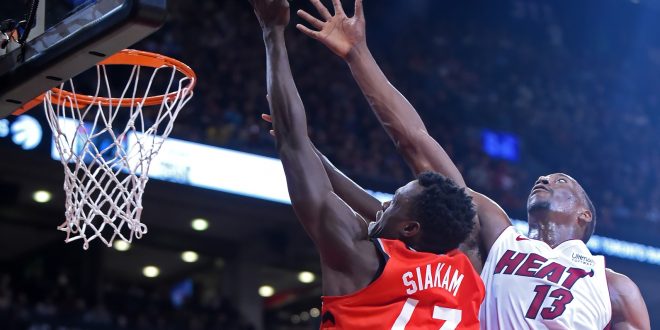 Miami Heat win by one at the buzzer

Two teams went head to head last night literally and figuratively. The Heat traveled to Toronto to hold off the Raptors to win a close game despite the drama on the court. The Heat won 90 to 89 in Toronto making that their 5th straight win forcing the Raptors to end their 5-game wining streak. The last time these two teams played each other back in April 2017 the Raptors won 96 to 94. Currently, the Raptors are 2nd and the Heat are 4th in the Eastern Conference.

Both the Raptors and the Heat fought hard on the court. The Raptors started the game with a disadvantage when the Raptors had to play without Kyle Lowry. The Raptors were coming into this game after a 114-113 OT win over the Nets despite Kyle Lowry suffering an injury. After winning against the Nets in OT, DeMar DeRozan expressed concerns about not having Lowry on the court.

Their one-point win over the Nets showed the Raptors it was possible to win without Lowry but Wayne Ellington‘s shot was something they obviously weren’t expecting from the Heat.

Tension on the court

The game-winning shot wasn’t the only thing making the headlines. During the game, the Heat and the Raptors both lost a player due to a incident on the court. James Johnson and Serge Ibaka were both ejected from the game after there was an incident on the court between the two players. Followed by the loss that ended the Raptors 12-home game winning streak, there was another incident between two other players Goran Dragic and DeMar DeRozan.

James Johnson and Serge Ibaka were both ejected after throwing punches in Toronto. pic.twitter.com/fuVZ0ZVt3I